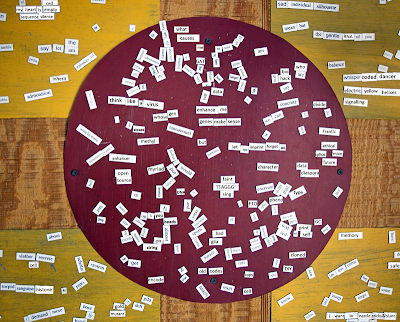 While dedicated bloggers across the Genomics Network were providing detailed accounts of arguments raised and research outlined in panels and plenary sessions at the EGN Conference 2013 , the TTAGGG poetry sequence began to be mapped. In her welcoming address, Catherine Lyall introduced delegates to the sequence and to the presence of a poet at the conference as an ‘experiment’, a term which I thought summarised the project with particular accuracy. In my own description of the sequence in the conference programme, I had urged delegates to get involved in the following (I hoped, persuasive) way:


TTAGGG is an open source poetry sequence generated through contributions from EGN 13 delegates. Contributions may be segments of verse borrowed (or hacked) from existing poems or prose, or they may be individual words or fragments of ‘found’ text snipped from the conference programme or heard in presentations and discussions. You might write your own poetic responses to ideas generated throughout the conference, or to the poem itself as it is built and modified online. An experiment in artificial evolution in the creative commons, the TTAGGG sequence will store complex information, respond to its environment and be a thing of strange beauty, open to modification, enhancement, repetition and mutation. 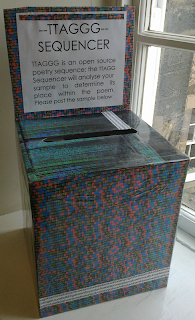 Cuts from the TTAGGG Sequence

opening provocation: promise/ peril
what is ... what ... um it's ... a hard question         the people legacy
borrowed from the network
globalisation of the subjects we address
challenges around life s/ on the brink/ of major scale
these bugs/ can eat their own waste!
ignore these/ listen to them/ pull out the science, hold it up/ an heroic vision in messy places
messy like democracy/ sounds like science, golden age/ speaking truth to power
dossier of compromise/ science disappears/ elite compromise vs. idealised advice/ pure & removed: the science dictates

Transcription is not fit matter for poesy
TTAGGG poetry sequence is under citizens enquiry
Replication is serious flattery
The enlightenment is not the enemy
Become knowledge, circulate freely
From cutting paper, to CAD molecule, a filmmaker's journey
The deficit model is bankrupt, but has so much currency

If someone mutated my DNA would this then lead my soul astray
Climate change fury, decimation of mankind, fascinating, play

Please capture my core, decorate your DNA for your children
My sweetheart took his burnt toast & departed with his cellular automaton.

Infinitesimal paper & scissors that should play with hierarchies
Public & private together in this space, between plate & lip
millions of wells reading sequences
Of shrug biologists who say PUBLIC but face but a sacral population's
extended phenotypic structure fluffed to rubric lattices

We start with an opening provocation,
under the sign of Watt & ether
shouting out to find a common ground
There weren't too many rules, only
you have to lock people together
for days to get them to understand one another
's vocabulary
Converting jargon into something
people can understand, that's the knack
Feedback loops between consumers & providers are fraught
with the sheer density & complexity
of poetry refusing to cooperate
ignore these, listen to them
pull out the science, hold it up: an heroic vision in messy places
(messy like democracy)
this is sounding like science speaking truth to power
public understanding is itself a metaphor

I liked the people
but I have just one question    a critical remark
really
What … what would NA12878 do?
what is ... what ... um it's ... a hard question
it’s a hard thing, being a critical friend: waxing or waning,
meeting for breakfast etc., having a life
talking through issues
etcetera.

Imagining the genome
retro futures under review
the myth of science lives on
a new golden age a newly acceptable Enlightenment continuing
between Adam Smith's tomb at Canongate Kirk
& the cone on David Hume's head
Fluid networks permeate the life science web
philosophers of the future rebound
reflecting on the sound of glitchy data
For philosophies read textual
error: ask a stem cell what it is, res public collaboration shaving words off acronyms
the TTAGGG Cloud: impossibly linear Wordle!
Perfect distribution of emphasis cut with rigour & balance!
nothing in life expresses ©  like an MOU/kou/□/xxx
we don't yet have a language that doesn't begin
with an assumption of separateness
Posted by mobo at 16:14