NeuroEthics Film Festival asks whether or not we are zombies

Do we have free will, or is our behaviour ultimately controlled by our biological brains? Does morality actually exist? Recent advances in our understanding of neurobiology have raised a number of ethical questions for human beings.

Using a number of films including the 1962 film entitled The Manchurian Candidate where Frank Sinatra plays the role of a man whose mind and free will may be controlled by others and the film Clockwork Orange, a neuroethics film festival was organised between the 23-25 November 2012 at the Edinburgh Filmhouse. The event was organise in partnership with: (1) the Scottish Council on Human Bioethics , (2) the Edinburgh Filmhouse, (3) The ESRC Genomics Policy and Research Forum and (4) the Mason Institute, Law School, The University of Edinburgh.

The film festival sought to address some of these questions in post-film discussions with the general public and a number of expert panellists. The issues included whether the responsibility of an individual actually exist? If it doesn¹t what are then the consequences for our legal systems and the manner in which human beings see themselves. Could they just be considered as biological robots or
zombies?

Participants were then able to engage with some of the issues raised by new discoveries in neurobiology and the ethical implications which result from them. One question that kept recurring in the debates was whether it is better to know the truth or to be happy. What would you choose?
Posted by mobo at 09:50 1 comment:

Overview below, click on individual boards for a zoomed in version! 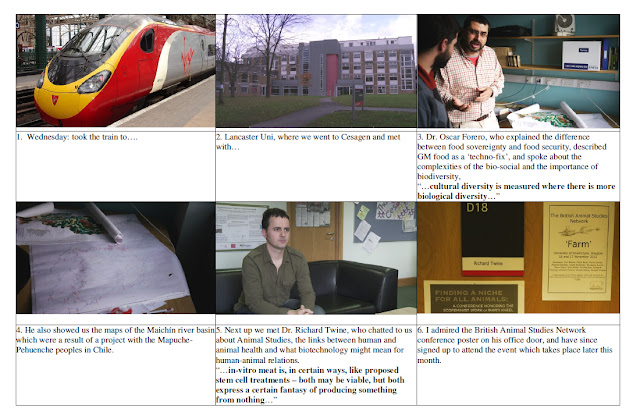 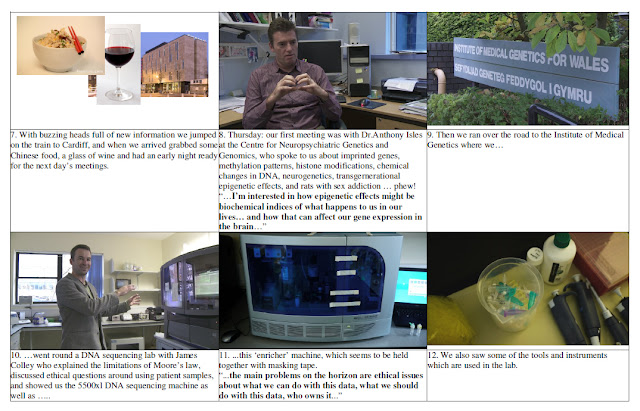 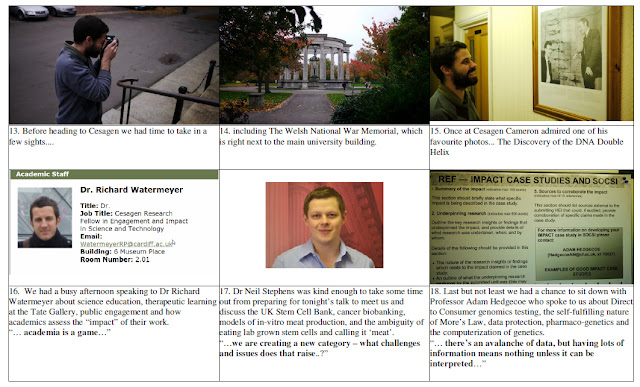 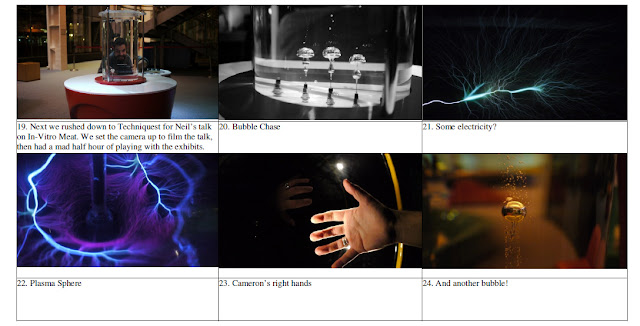 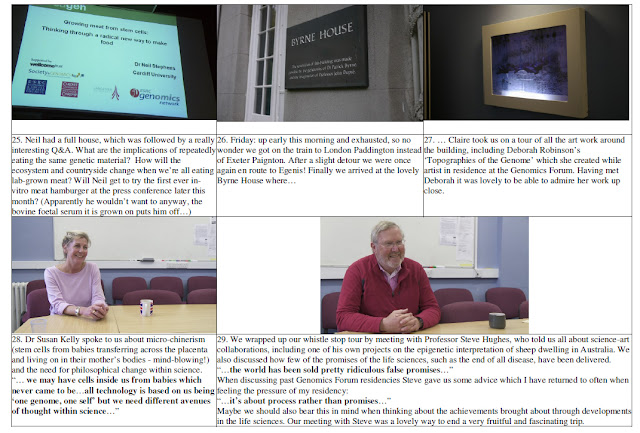 Opportunities and challenges in the “age of biology" 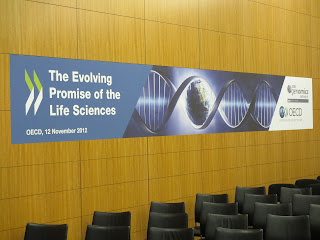 Keynote Address: The 21st Century ‐ the Age of Biology

The Genomics Forum and OECD-produced “Global Forum” conference; entitled The Evolving Promise of the LifeSciences, took place in Paris on 12 November 2012.  The Global Forum set out to explore the changing perceptions of what the biotechnology revolution has delivered during the last 30 years, and the impact current perspectives might have on the future evolution of the life sciences.

The event commenced with a keynote address from Professor Anne Glover, Chief Scientific Advisor to the President of the European Commission, on The 21st Century – Age of Biology.  In setting the scene for the subjects the Global Forum would deliberate, Professor Glover – who has a background in molecular and cell biology – recognised the importance of considering where both science and society is positioned in terms of biotechnology and what the future might bring.

Professor Glover identified that historically, each of the last few centuries had been recognised for developments in philosophy and technological thinking, with the 19th century being the age of engineering and the 20th century the age of chemistry and physics.  The technological developments during these times brought benefits to society, although many of these – such as the internal combustion engine – were initially seen as being provocative and even dangerous.

What did the future look like in the past? 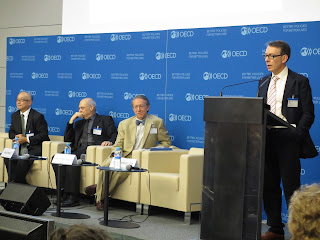 Plenary One: Retrospective – The Role of Expectations in Biotech Developments


What did the future look like in the past? Can we go back to describe innocently what the future looked like and how it turned out? Are we conscious of the ways that past futures didn’t work out? These were a few of the questions put forward by Steve Yearley whilst chairing the first plenary session of the Genomics Forum/OECD Global Forum on The Evolving Promise of the Life Sciences. The session looked at understanding the economic and social expectations of biotech over the last thirty years.

Robert Cook-Deegan began making a loose analogy comparing developments in the IT/internet industry with biotech, suggesting that biotechnology is shifting in the direction of an information science. Both the internet and genome technology grew out of government funding aimed at solving particular problems.  The first IT customers were usually government customers who required great big machines good at counting things i.e. the first computer bought was for the US census. In contrast the Human Genome Project arose after a debate in the 1980’s with a government driven effort to understand disease and the first customers for early products were research labs undertaking research into molecular biology.  Both IT and biotech were viewed as “hot” technologies, leading to government action to kick-start their wider development.

However, as IT and biotech have developed, whereas the IT big guns of Apple and Microsoft helped shape policy and frame issues the same has not yet happened with their biotech equivalents. Yet  the future of biotechnology will be different to the past: it will probably look more like the history and business models of IT. Looking at Moore’s law; i.e. chip technology gets twice as good every 18 months – essentially technologies once thought of as being restricted because their costs were prohibitive become ubiquitous.  In biotechnology, the first genome map cost over $1 billion to generate and now it costs c. $1,000.
Read more »
Posted by mobo at 10:30 1 comment: 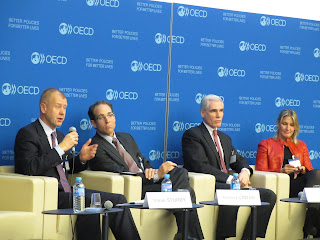 Plenary Two: Health and Biomedicine in an Age of Convergence

Convergence and divergence were key themes of this OECD session on Monday morning which anticipated genomics developments in health and biomedicine.  Vicky Seyfert-Margolis (Senior Advisor for Science Innovation and Policy, FDA) spoke about the FDA's mandate to promote innovation to public health within the context of an innovation ecosystem that is under significant stress.  Seyfert-Margolis attributed this, in part, to a flawed model of translation which focuses too much on the academic drivers of tenure and promotion which reward an individual rather than team-based efforts: a different, portfolio approach is needed to get products to market.  She argued that regulatory science is under-served as an academic discipline and that we need better tools for translation which force us to think harder and smarter about how to move the academy and government forward together in a way that involves patients - not as human research subjects - but as engaged partners.

Hans-Georg Eichler (EMA) described technology and policy as uneasy bed fellows.  He too spoke about the need to bring the patient voice on board but reminded the audience that patients and consumers constitute fundamentally different categories with different priorities and perspectives. In his view, clinical development is expensive because we use antiquated technology.  This was a case where we could make better use of existing tools and greater use of electronic trials but this would require better alignment - convergence - of technology and policy.
Read more »
Posted by mobo at 09:30 No comments:

Industrial Biotechnology and the Emerging Bioeconomy 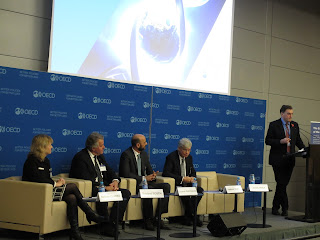 The third plenary session of the conference focused on industrial biotechnology in the context of the emerging bioeconomy. Chaired by James Philp of the OECD, the session featured speakers from the Russian Federation, Brazil, the Netherlands, and the UK. A key theme to emerge from this panel was how the specificities of the seemingly global ‘bioeconomy’ are influenced by geographies, histories, and government policies at the national level. For example, Russia and Brazil are large countries with plenty of arable land for growing biomass, while the biomass potential of Britain and the Netherlands is much more constrained. These factors are contributing to the development of different national strategies for promoting industrial biotechnology.

Vladimir Popov from the Bakh Institute of Biochemistry outlined prospects for the bioeconomy in the Russian Federation. With a huge landmass, 20% of the world’s forest resources and plenty of water, Russia could become an increasingly important producer (and exporter) of biomass. Their biotech sector is currently small (less than 1% of GDP), but recent initiatives (including a 2012 State coordination program for biotechnology development until 2020) are placing strategic emphasis on the bioeconomy. Priority areas for development include agbiotech, forest biotechnology, and environmental protection, but interestingly not biofuels. (Despite a long history of creative methods for extracting alcohol from plants, as Popov pointed out!) This is in part owing to geopolitical considerations, with Russia relying heavily on oil both domestically and as an export commodity. At this stage, government intervention in the form of subsidies and legislation is seen as critical for getting a bioeconomy off the ground.

The Evolving Promise of Marine Biotechnology 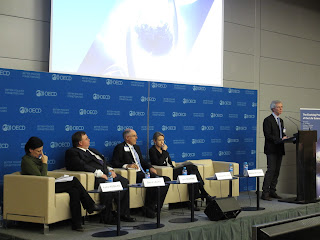 The fourth session of the The Evolving Promise of the Life Sciences Global Forum focused on both the potential and challenges presented by biotechnology from the marine environment.

As session chair Steiner Bergseth – Research Council of Norway - noted in his introductory remarks that whilst marine biotechnology may not yet be in the mainstream, it offers significant promise in terms of delivery of new medicines, novel compounds, food production, and biofuels.  Ninety per cent of the global biosphere is marine, but remains largely unexplored, so may well contain organisms that could be the “engine” to drive advances in biotech.  However, future exploitation of the marine environment needs to be undertaken both sustainably and equitably.

Rachel Ritchie – University of British Columbia, Canada – further set the scene by providing more detail on the promise of marine biotechnology – which can be defined as “the use of marine organisms as a source or target of biotech”.  The promise of marine biotech covers almost every imaginable field, potentially offering solutions to global grand challenges including: health; food; sustainable energy; industrial products; and tools to manage and protect the ocean’s resources. 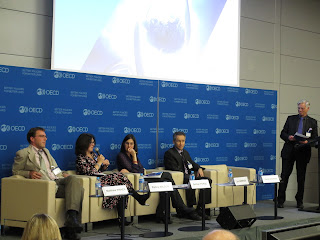 Invasive pathogens and infectious diseases have been with us through the ages from the bubonic plague to the yellow fever outbreak in the US to the more recent SARS and H1N1 swine flu pandemics. But with increasing global travel and trade, invasive pathogens are ever emerging and are ever more threatening.

The truth is that we don’t know what exists and we need to create models and policies to deal with those threats that we cannot prevent.

How can we translate emerging information into effective and pragmatic public policy? And how can it be done without limiting prosperity through trade and travel?

These were the questions posed by Professor David Ingram as the chair of Plenary Five: Emerging Pathogens in the Environment.

The first speaker was Professor Jan Semenza from the ECDC (European Centre for Disease Control). Professor Semenza began by giving the audience a bit of background about the ECDC. The ECDC was set up in the wake of the SARS pandemic when Europe realised that it couldn’t solely depend on the US’ CDC in the fight against infectious diseases. As a public health agency, the ECDC has a specific mandate covering infectious disease control, especially cross border infection potential. It monitors infectious diseases in Europe and all EU member states must report specific outbreaks and prevalence of certain conditions to ECDC. The ECDC is also tasked to give scientific advice in the wake of infectious disease situations.