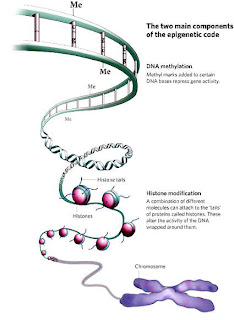 I began my residency at the Genomics Forum staring at a graphic of DNA winding around histones, exposing some genes for activation while spiky epigenetic factors cling to the spools of purple string from worm-like tails. The image claims to describe epigenetic mechanism operating in DNA, and has been one of the many diagrams, images, reconstructions and videos I’ve turned to over the last couple of weeks to try to get a handle on the basics of epigenetics research. This process has also included playing two games – ‘Gene Control’ – in which you can change the shape of your DNA and its levels of methylation by cranking up a volume control, and ‘Lick Your Rats’ where frantic mouse-clicking helps you activate your rat pup’s GR gene. This has, I promise, been a valuable use of my time over the last fortnight as a poet in residence.

Faced with the overwhelming wealth of research being undertaking in the Genomics Network, epigenetics jumped out as a way of honing my focus during my time here. This was in part an acknowledgement of my own ignorance, as by turning focus beyond or ‘above’ the gene, epigenetics upset everything I thought I knew about genomics. I’ll return to the subject of my own ignorance again (and again) later and just admit here that I had never before encountered discussions about the relationship between environment and the genome explored in epigenetics. This is in spite of the field being, according to the programme for the upcoming EGN Conference (April 30th-1st May) “one of the most fast-moving and potentially transformative areas of contemporary ‘post-genomic’ science.” The suggestion that environmental influences can cause changes in the structure of the genome, meaning that genes express themselves differently even if the organism is a genetically identical clone, seems of radical importance, not least because ‘environmental influences’ might refer not just to biological factors, but to social, psychological and cultural experiences. The trans-generational considerations of epigenetics make it even more fascinating, and much of the writing on the subject I encountered raised the possibility that changes in gene function might be inherited without the DNA sequence changing, and influenced by factors such as stress, famine, ill-health and parenting.

Scanning through previous posts by writers, playwrights and filmmakers in residence on the Genotype blog, I’ve become conscious of the reading and research they’ve undertaken in order to get to grips with genomics before beginning their projects. My residency is much shorter, just under a month, so I’ve had to take a more piecemeal approach, poaching information from their posts, open-access scientific journals, social science reports, ever-ready Wikipedia and websites for parents-to-be which translate, sometimes with the help of mystifying metaphors, the complexities of epigenetics research on gene expression into language a non-specialist can understand.

The problem of translating insights gained into the operation of genomes at a molecular level into language for lay folk seems to be a running theme of epigenetic debates. Without ever having studied the life sciences seriously (not since petulantly refusing to dissect a heart aged 15) I have encountered analogies for DNA and its operation, from building blocks to blueprints, codes to recipes, both for the organism and the individual. On online magazines and discussion forums, I’ve followed arguments in which a profusion of personality traits and emotional, intellectual and gender characteristics (including a love of pink for girls!) have been attributed to genetic inheritance by people whose experience in genomics research has, it’s fair to say, failed to impress me. Or rather, whose complete lack of experience in genomics research has invariably infuriated me.

So, at the same time as I’ve been doing my best to read widely in reliable research and to understand how DNA methylation and histone modification influence gene expression, I’ve been attentive to the ways that the facts of genomics, the real physical movements of atoms described in chemical structure drawings, molecular graphics or balls and sticks, get distorted as they are translated into language and dropped, somewhat haphazardly, into culture. The modernist writer Willa Muir sums up this interest in the ways ideas precipitate beautifully when she writes of newcomers to a small Scots village in her novel Imagined Corners (1931):

“Human life is so intricate in its relationships that newcomers, whether native or not, cannot be dropped into a town like glass balls into plain water; there are two many elements already suspended in the liquid, and newcomers are at least partly soluble. What they may precipitate remains to be seen.”

Because of my background, I’m particularly interested in how ideas that originate in scientific research can conflict with, overwhelm, co-exist or intermingle with other theories and ideas in circulation. In my own PhD research (at Edinburgh, in the Department of English Literature), I looked at the ways in which nineteenth century ideas of moral insanity, degeneracy and ‘born criminality’ continued to pervade popular culture of the 1920s and 1930s. For the Marxist theorist Raymond Williams, ideas that circulate in society may be dominant, residual or emergent, while intellectual historian Michel Foucault explores the way discourses acquire legitimacy within an overarching system of knowledge, meaning that some ideas, whatever their scientific basis, remains a conceptual possibility within a thought system. In my thesis research, I looked at the persistence of discourses which resembled the criminal anthropology of nineteenth century writer Cesar Lombroso in the interwar years, and their residual appeal in crime novels in which the telling shape of a criminal’s forehead or nose continued to pose as a valid way of assessing a person’s character. 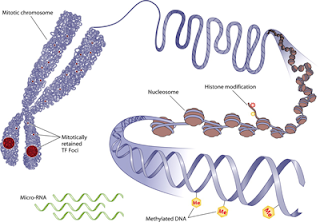 In my research into epigenetics with the Genomics Forum, I’ve been trying to work out how the insights of epigenetics fit within current discourse. Why does it matter that epigenetics arguably resembles the Lamarckian model of evolution? Can epigenetics be used to mount a critique of current social conditions, or could it be employed to confirm social prejudices? The way epigenetics is explained and converted into argument and narrative also fascinates me, and I continue to question about how, for example, was it possible for a magazine like Prospect to write the following on the subject of epigenetics in May 2008? Why did this incredibly reductive comparison of distinct historical traumas seem like the most apt way of describing epigenetics, and the most useful way of understanding of its applications?

“There is also the possibility that epigenetic inheritance is implicated in the passing down of certain cultural, personality or even psychiatric traits. For instance, historical "insults," such as Oliver Cromwell's brutal reconquest of Ireland in 1649, have led to an "embedding" of attitudes within the affected communities that persist for generations. … The possibility raised by epigenetics is that such cultural transmission may, after all, have a genetic component. Could it be that historical traumas, such as transatlantic slavery, leave some kind of genetic mark on the descendants of their victims?”

Through poetry, I’ve been exploring epigenetics and its implications in light of critical social thought, issues of identity, innovative poetics and new media practices. The poems I’ve been writing so far pastiche, not parody, scientific language, in order to make sense of and disrupt current accounts of the individual offered in both sociological and scientific writing. In particular, my focus has been on discussions about the ‘Glasgow Effect’ which documentary filmmaker in residence Lindsay Goodall has posted about here before. Without giving too much away at this early stage (or trying to pin myself down, perhaps) I’m interweaving my ‘translations’ of epigenetics research with insights into how individuals experience their culture and environment, and how subjects might respond to current research into their genetic inheritance. I’m trying to make sense of epigenetics by first making sense of the way is it represented and understood, based on the principle that the ways it has been and is being distorted are a crucial part of its meaning for culture and society. It’s too early to say what my results may be, but I’ve had an excellent two weeks so far in the friendly and dynamic environment of the Forum. I’m really looking forward to meeting academics working in the field at the upcoming EGN Conference 2013, sharing my thoughts and responses with them and even, although they don’t know this yet, eliciting some poetry from them in return.
Posted by mobo at 10:20