The Evaporation of Things, distilled

Ken MacLeod at the Evaporation of Things

Social science has a permanent problem of identifying its objects of study. The relationships, interactions, institutions, organizations and other aspects of society may have all sorts of things connected with them that we can see and touch, such as houses and police stations and pound coins and wedding rings, but the relationships themselves they aren't stuff you can spot on CCTV. Identifying new or hitherto unnoticed goings-on between people or in their minds or in how they relate to the world around them is always going to be tricky and contestable. Is such-and-such a one-off, a will-o-the-wisp, or is it, as the fashion columnists would say, a thing? (This usage of 'a thing' has definitely become a thing.) 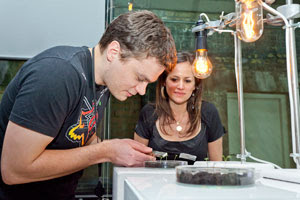 Artists, at least the kind of artists who cause outrage and bafflement when their work is exhibited in the Tate, have a similar problem. You want your work to glom onto something significant and say something about it that makes sense to yourself if to no one else, and you're allowed to do that with any material at all within the law and health and safety regulations: bits of tin, wire, plaster of Paris, marble, bronze, paint, canvas, neon tubes, dust bunnies, pickled shark... If you're very clever and /or lucky, you might hit on exactly the right expression for some feeling or situation or condition that no one has quite put their finger on before. Fame, fortune, and an angry editorial in the Daily Mail await.

So there they are, social scientists and artists, looking about, antennae quivering, alert for the new. Might they sometimes help each other lock onto the same scent?

Last week I attended a symposium at Inspace, the arts venue of Edinburgh University's Informatics Department. The space is functionally divided between an auditorium and a gallery, and is so modern it aches -- literally enough after a while, as the audience sits on thin cushions scattered along steps. The event, initiated by the Genomics Forum, brought together social scientists, natural scientists, and artists. I was there to blog the event's first day; Pat Kane, currently a visiting fellow at the Forum, would cover the second. The question the symposium asks, I suppose, is: 'Is the question "Where is the thing?" becoming a thing?' Its hashtag is #eot13. Its rubric:


The symposium Evaporation of Things is intended to explore the increasingly digital interface to biological ‘things’. From the phylogenetic analysis of plants, to the data representation of the human genome project, studying the subject on a screen has replaced the study of the material artefact. For the general public, astronomy remains a question of looking at the stars in the night sky, whereas for astronomers the use of optical telescopes is a thing of the past – so the question emerges “where is the thing?”

The natural sciences have been prolific in practising not only this evaporation of things but also in reassembling innovative living entities, such as genetically modified organisms, and new creative possibilities are emerging with the advent of the enhancement of the human body with cybertechnologies. This fluidity of the living things is potentiated by interdisciplinary engagements, and entities which are in one minute the subjects of sciences become in the next the raw materials for arts.

Forum Director Steve Yearley welcomed us to the event. Then one of the organisers, Maria Grade Godinho, introduced the session. She explained how she'd trained and worked as a biologist. Encountering genes with patents had brought home to her that what she did in the lab was part of a wider social world, which she wanted to investigate further. Here, she wanted to explore the possibility that the relationship between objects and data wasn't one between matter and mind, but between two different states of matter -- hence the metaphor of evaporation.

Maria's co-organiser Chris Speed of the College of Art kicked off with a clip of the Challenger disaster, with its familiar voice-over of a man reading from the space shuttle's instruments and continuing to relay numbers for several seconds after the rest of America had watched the craft explode live on television. That shocked moment of delayed realisation when someone tapped the announcer's shoulder and pointed to the TV screen was, Chris said, what this symposium was about. He gave other examples: the debris of the later space shuttle crash, Columbia, tagged, connected by strips of tape, and spread across across a floor as a physical database; the flash crash of May 6 2010, as two duelling algorithms dumped stocks in a death spiral only interrupted by physically pulling the plugs; and one of his students' art projects, which consisted of a thick stack of A4, a printout of reports from her iPhone for one day.

The presentations that followed were intriguing, varied, and of high quality. Mike Phillips took us from the melting Wicked Witch to the unease-inducing ambiguities of how scientific imaging converts numbers to visuals. Synthetic biologist Vincent Danos took us ever deeper into the molecular structure of starch and the phenomenology of mathematical modelling. Laura Beloff charmed and delighted with her sci-art projects, starting with a portable 'space station for fruit flies'. Sociologist Gill Haddow walked us through how 'human' became in some contexts legally defined in terms of percentages of DNA. 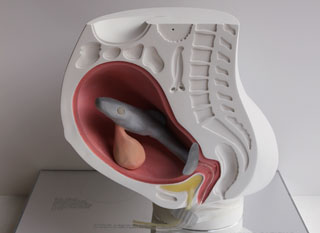 After and over drinks in the early evening, the exhibiting artists displayed and discussed their work. I wouldn't presume to judge or compare -- take a look for yourself -- but for me by far the most memorable and disturbing of their artefacts was Ai Hasegawa's short film of a woman giving birth to a salmon, which she later eats. Sushi will never be the same.

So was the symposium a success? Did the artists, scientists, and sociologists combine their particular points of view to outline, somewhere in the room, an elephant we'd have otherwise missed? I think they did. The evaporation of things is a thing.
Posted by mobo at 11:05