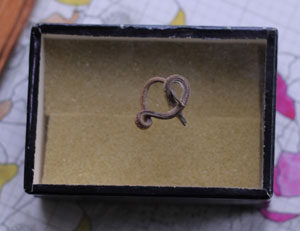 I had a really inspiring time at The Evaporation of Things last week, especially the bring-a-thing, show and tell. Funny how things transpire, but it just so happened that I re-found my thing the night before, after sorting through boxes after moving a year and a half ago. I’m in danger of falling into the pits of innuendo here, but, as you may be able to see- my thing was a small shrivelled up snake.

I hadn't realised I had held on to it, but somehow it has survived 25yrs hidden away in ‘miscellaneous’. Quite a literal take on evaporation, it's something which I've often marvelled at. I found it when I was nine, having just moved up from London to the middle of nowhere. I’m pretty sure I also saw an adult Adder as well, one of maybe 2 or 3 occasions that I’ve seen one. One of the things that I’ve always found interesting is that, although it’s gradually dried out more over the years, to me it is still a little snake.

At the time I felt like I was constantly assessing the various states of decomposition of creatures around me, foxes over the gamekeeper’s wall, or a sheep in the burn. But with them, a transition would be made…from sheep, to sheep skeleton, then to just- a skeleton- ready to have it’s bones poked at and investigated as to what poor creature it once was.

However this snake has always still been a little snake, and I'm glad that I've finally got over the terrifying fear that it (all 1cm of it) was going to come back to life!

Outside of the Evaporation I’ve been transcribing and digesting,the interesting interviews I conducted down in Exeter. I have them on my phone, so when shuffling they often pop up, a welcome break from the few albums that I’ve over-listened to!

I’ve also had some interesting, but fairly brain-straining discussions with Colin Semple
Trying to visualize Chromatin structure and the hierarchy of DNA, quite taken by these fractal globules. As always, it’s a bit of a battle between not over-simplifying and clarity. A fun challenge with things working at hugely different molecular scales, and to try and convey with the limits of stop-motion animation. I’ve had to resort to some computer manipulation, but I’m hoping the immediate/organic nature of the cut-out animation isn’t getting lost!
Posted by mobo at 13:38