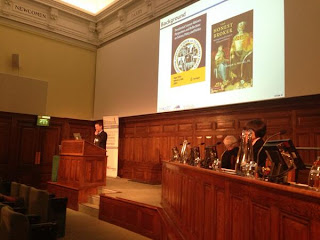 
It’s a beautiful spring morning in Westminster, and the cherry blossoms are in full bloom. A fitting occasion to gather and celebrate a decade’s worth of achievements of the ESRC Genomics Network.

The conference opened with a tantalizing film clip (by filmmakers-in-residence Cameron Duguid & Lindsay Goodall) in which several EGN researchers grappled with the question ‘What is genomics?’…more on that later! Genomics Forum Deputy Director CatherineLyall then welcomed everyone to the meeting, and noted that poet-in-residence Samantha Walton will also be capturing this event in verse.

Adrian Alsop (Director of Research at the ESRC) provided some opening reflections regarding a decade of significant change for the ESRC, noting several significant shifts that have taken place in research policy and strategy over the lifetime of the EGN. Notably, ‘impact’ has become an increasingly dominant narrative for UK research, and the ESRC has been influenced by engagement with EGN researchers to define and support a definition of impact that embraces a wide variety of activities. A second big change that the ESRC is working with is the rise of an industrial strategy for science, one that strives to scale up industrial biotechnology with the promise of promoting health, wealth and an increasingly sustainable bioeconomy. Growing investments in ‘big data’ and the increasingly global character of social science research are two further changes influencing the context in which the ESRC operates. How to analyse and engage with these changes is an ongoing challenge and opportunity for social science research.

Adrian noted that EGN research has kept pace with several of these broader changes, and suggested that the interface between the life sciences and social sciences will continue to be a major theme for the first half of the 21st century. Maintaining quality, impact, and independence in social science research will be critical.

We then moved on to a provocation by Roger Pielke entitled ‘Five Lessons of Science Advice.’ Roger highlighted the ongoing relevance of this topic by flagging up George Monbiot’s column in The Guardian yesterday, which focuses on the role of science advice around the current debates on bee health and pesticide use in Europe.

Roger drew on over a decade of research, and specifically a series of interviews he has done with 7 US Presidential science advisers, to offer some key lessons about science advice, with some great cartoons to accompany these thoughts:

Lesson #1: Science advisers are not superheroes. There is still a widespread expectation that ‘science speaks truth to power,’ and scientific evidence should be able to tell us what to do in tricky political situations. The reality is a bit more complicated, and the path between scientific knowledge, advice and decision-making in democracies is messier.

Lesson #2: ‘Science advice’ is a misnomer. Roger argued that we should be thinking instead in terms of ‘political advice.’

Lesson #3: Political advice from a science adviser can take multiple forms. Using a lively example about finding somewhere to eat dinner in London, Roger outlined 4 idealized categories of advice about science, which are expanded on at length in his book The Honest Broker.

Lesson #4: Institutions matter. Institutional structures can end up having significant effects on decision-making practices, and we need to be sensitive to these broader factors. Roger gave us the example of the US President’s science adviser, who is formally positioned outside the President’s ‘inner circle’ of advisers (in part because science advisers can be called to testify in front of Congress, a level of exposure that precludes participation in highest-level decision-making).

Lesson #5: “Politics is more difficult than physics” (a well-known quote from Einstein). Political thinking is very different from scientific thinking, and in practice science advisers need considerable experience in politics to do their jobs.

Roger concluded by saying that in the US and Europe, science enjoys enormous respect and authority, and that the ‘mythology of heroic science advice’ lives on – with a growing role for science advice currently being highlighted by institutions including the United Nations and the UK House of Lords.
Posted by mobo at 12:33