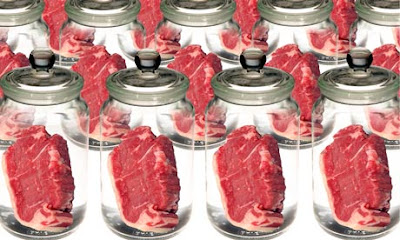 Not all conference panels really work. Quite often, I’m left with the sense that several people talked briefly, even superficially, about disparate topics, and there wasn’t enough time at the end for the chair to draw them together into a coherent discussion!

This panel at the EGN Conference was delightfully different, though the topic is serious. Dan Crossley (Food Ethics Council), Ann Bruce (Innogen), Richard Twine (University of Glasgow) and Neil Stephens (Cesagen) each spoke briefly but in detail about some aspect of meat production and consumption – from reducing how much meat we eat, and greenhouse gas emissions from livestock, to the possibilities of veganism, vegetarianism and ‘in vitro meat’.

It was an incredibly rich session and it would be impossible to do justice to all four presentations here, so I’m not going to try. Instead, here are some thoughts from me sparked by the presentations from Dan Crossley and Richard Twine in particular. What follows are necessarily my personal thoughts, and not to be attributed to any of the speakers, the Genomics Forum or Network!

Having read the abstracts for the session in advance, I went into the lecture theatre willing to feel grumpy – mostly (with apologies to Dan Crossley) because of the Food Ethics Council’s position on ‘less but better’ meat consumption, and valuing the meat ‘we’ eat more. To me, this rather smacks of selling out – if meat consumption is wrong on so many levels (which I think it is), why take a ‘softly, softly’ approach?

I’ve written on my personal blog before about the UK Government’s approach to reducing (red) meat consumption, and there are strong parallels here. Since we know that (red) meat consumption has a linear association with certain serious illnesses (rather like cigarettes, there’s no level of consumption that doesn’t increase your risk), why tell people to reduce, when the recommendation should be to cut out? Seemingly, that’s just too much radical change – not just for consumers, but for the meat industry. Insert cynical emoticon here.

I can also see the other side. Only 3% of the UK population is vegetarian, let alone vegan. Amongst social science academics, that figure would be a bit higher (though based on last night’s conference dinner, perhaps not as high as I would think). Amongst my friends, the figure is higher still – somewhere approaching 50%. So it’s easy for me to forget that for many people, vegetarianism is still a kooky, socks-and-sandals, why-would-you-do-that kind of activity. And rather like capital punishment in the 19th century, meat consumption may well in practice best be reduced by degrees, not wholesale. Get people used to the idea of meatless meals, increase awareness of industrial farming practices, and meat consumption will gradually go down – or so the theory goes.

I can see that over time this strategy will likely lead to overall reductions in meat consumption. And if that’s what you’re aiming at, all well and good. But I can’t actually see that this strategy will lead more people to become vegetarian. Instead, it’s more likely to make people think that eating meat is ok, so long as they do it ‘with care’. And for the life of me I can’t see how the definition of ‘care’ can include slaughtering a healthy, sentient creature without its consent, in order to eat its flesh.

So all in all I went into the session willing to feel grumpy, and I came out rather grumpy! The main source of my grumpiness is that animal rights were barely mentioned in a conference session that was all about meat. Indeed, it seems that animal rights aren’t really that relevant to discussions about meat-eating, vegetarianism and veganism anymore. Instead, it’s climate change, environmental sustainability and public health. I was extremely glad when Richard Twine closed by gently encouraging audience members to read more about the relationship between human beings and non-human animals, pointing out that animal ethics tend to get sidestepped in current debates in favour of the ‘easier’ environmental and health issues.

Even 10 years ago, this wasn’t the case. Research on vegetarianism in the West consistently showed that animal rights were the motivating factor for the majority of vegetarians, admittedly with personal health a close second. If current environmental concerns can force a major reduction in animal slaughter, I won’t be complaining. But whether they can fundamentally change how the majority of humans conceive their relationship with non-human animals, I’m not so sure.
Posted by mobo at 12:10