Ah, Carl Sagan! There was a TV series in which no one said "I've had an incredible journey to discover just how much I care about cauliflowers"...and which actually WAS a journey. 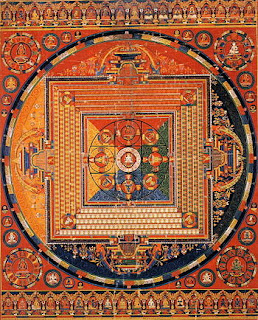 Whoever sees
All beings in the self (atman)
And the self in all beings
Does not shrink away from it.

For the one who knows
In whom all beings have become self
How can there be delusion or grief
When he sees oneness?

By "it" is meant, I think, what Carl Sagan called Cosmos, and what I call "reality" - or at least I'm calling it reality right now.

The thing about Hinduism, or one of the things, is that it eschews the Western hierarchy of Appearance as being less than Reality...which dichotomy underpins the languages of Western Philosophy and Science. Hence Hinduism's attraction to the great underminers of that tradition from the West itself from Schopenhauer on.

I'm doubtless going out on a limb here, but I'm starting to think of the different levels of "reality" in our biology, of the genomic perspective, as being related to this perspective, at least on the level of emotion... my emotion, anyway. So here goes:

Maya, or "illusion" as it is usually rendered in English, is the only way we ever see or understand or act upon anything. We intuit another level of reality, brahman, which is only ever accessible through the extinction of all desire. Including the desire for understanding. Hence our apparent God-like command of information is only ever apparent.

(Yes...this stuff does go round in circles...and doesn't get you anywhere except to a different part of the circle. The point being that is there is no such thing as a "point"...ask Max Planck if you don't believe me!)

To speak in terms of rude practicality, we can only sequence or read a genome by turning it into a not-genome...by cutting it up and cloning a bit of it at a time. Genomes as such and in situ cannot be read. Even here uncertainty is an absolute. We are never detached in our observation...to observe is to act. Language, including "scientific" language, does not DESCRIBE the universe, it acts within it - it interacts with it.

I trust this is sufficiently obscure.

Life, considered from the imaginary, objective viewpoint of a God-like observer, consists, so far as we can tell, of bacteria with temporary variants. This "life" exclusively exists, so far as we know for sure, only on a oblate sphere in the middle of nowhere, a fly-speck of chemical activity on a chunk of matter almost wholly surrounded by void.

Matter itself is anomalous...most of what we call the universe is empty of it. Life is an anomalous and insignificant subset of an anomalous subset of "reality"...or of "Brahma" if you like.

Which is why it is useful to explore atoms and some of their special and unlikely arrangements in the form of molecules of DNA. In case they turn out to be useful, including "useful" in the sense of understanding where and what and for how short a time we "are". And what a statistically inestimable privilege it is.

(That's as near to religion and meaning as we can ever get...call it Jaweh or Krishna...what does it matter?)

Genes are not the "truth" of us. Truth as a concept is and only ever can be useful to us. Nobody and nothing else. Understanding life in terms of genes, and now genomics, is useful. True is something else again.

(Don't get me started)

Our sense of wonder...and inadequacy...in the face of the infinite, has been and will continue to be expressed in our explorations of what we call "reality", what the Vedas call "brahma".

But Maya...that is, our lives...will also continue to be the only actual measure of how useful, or not, reality is to us. And our decisons are only ever about how this unearned, accidental wealth of ours can be properly and most pleasantly distributed.

Anyway...that's the kind of stuff I've been thinking about...and would like to discuss in the Traverse bar on Thursday next.

ps Incidentaly, RIP Lynn Margulis, who as Lynn Margulis Sagan put forward the first model fior the evoltion of complex celled life - endosymbiosis - or one single celled creature living inside another - in 1967

pps : The resemblance between this image of a human genome from the University of Maryland and the Mandala above, is of course purely coincidental.

(as above, so below) 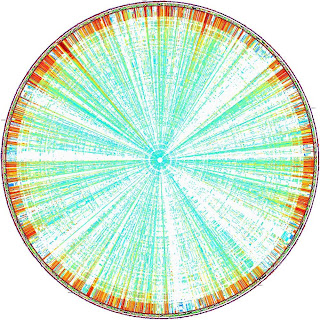 Peter Arnott is Resident Playwright at the ESRC Genomics Forum April 2011 - April 2012. Appointed in partnership with the Traverse Theatre Edinburgh, Peter will be hosting a number of public engagements as he explores ideas and seeks inspiration for a genomics related play.
Posted by Playwright in the Cages at 15:39