Living in the Bacterial World 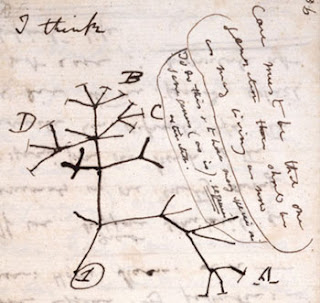 You recognize this fella? Sure, it's the tree of life as sketched by Charles Darwin in "red transmutation notebook B" early in the 1840s. Famously, the words "I think" are clearly and charmingly visible up in the top left corner.


Darwin was lovably and maddeningly diffident. Afflicted with afflatus, he was always reluctant to discuss the implications of his work in print, let alone in public. But this scratchy graphic, with the figure "1" standing for the common ancestor of us all, ranks with Crick and Watson's model of the double helix as the icon of a materialist, historical understanding of what we persist in calling "life."

I've cut and pasted another and more recent version of this famous graphic at the bottom of this post. This one is derived from the microbiologist Karl Stetter, and reflects his research priorities as much as Darwin's did his. I saw it first in a cracking book by Andrew H Knoll called "Life on a Young Planet" which joins the book list I'm going to be posting as recommended reading at the end of this residency (once I've read them all myself!).

Knoll and Stetter are enthusiasts for the small and slimy end of things. You'll note that what we think of as "life" most of the time occupies a mere sliver of the diagram. Up there at the top right, look. Plants and animals and fungi. Overwhelmingly we are living, say Knoll and Stetter, in a bacterial world. And we always have been.

Shaded in red down at the bottom is a great big idea about the origins of life. What all our ancestors had in common, as well as the rudimentary chemistry of life in their combinations of RNA, DNA and amino acids, was thermophilia. . Most of what we know these days as "archaea" still live in hot springs and at oceanic thermal vents and under the earth's crust, which, while not recommended as holiday destinations, may well be where most of what we call "life" still lives. They all liked it hot

They also liked (and like) it without oxygen, which was lucky, as there wasn't any yet...or not much. Oxygen was poison to them. They excreted it as a waste product when they'd done munching on Carbon Dioxide. Which is lucky for us. Life itself, on a microbial scale, created, eventually, the conditions for large scale agglomerations of tissue like you and me and the elephants...and the fruit flies...but only after most life had derived energy from light and heat. Photo and Chemo-synthesis.

Darwin was famously flummoxed by the fact that life, or the fossils/traces of life, seemed to appear quite abruptly in the ground. It seemed that complex animal life, (overwhelmingly trilobites in Darwin's day and ours) were suddenly just there! Darwin's tree of ancestry demanded a root...at least one...that had to extend in time back beyond that borderline where hard bodied fossils had been found...that explosion of complexity in the Cambrian epoch, which we now know to have been around 480 million years ago.

That invisible ancestral world is where Andrew Knoll lives. And it's a riveting and exciting place to explore. Especially when one comes to understand that the earliest life yet found is in rocks in Greenland that have miraculously survived uncrushed by tectonic forces that have now been dated (using the wonder radioactive decay clock of Zirconium) as being something like 3.8 BILLION years old.

That's right, Martha. Plants and animals and fungi only arrived on earth eight ninths of the way to the present day. We are all Eucarya...that is, our cells have a nucleus surrounded by another membrane. And these two cell areas have precisely demarcated duties when it comes to memory (our genomes live on strands called chromosomes that live in the nucleus) and the more energetic activities of energy storage and expenditure -and reproduction -which all happen in the outer part of the cell, the protoplasm.

The overwhelming biomass of planet earth was and remains procaryotic, single-celled life with its genome nicely arranged on a single, circular chromosome. And nothing like us would work in the present, or would ever have evolved in the past, without "life" - that is, bacteria - working away at the heart of it.

You'll also notice a whole third kingdom on here. These "archaea" were discovered to be distinct from bacteria through genetics. They look pretty similar, even under a microscope. But they ain't according to their genomes. More recently, they've been found to be closer to us genetically than bacteria are, hence more recent shared ancestry. There is some other big news tucked away at the bottom of the chart.

Though our shared ancestors in the hottest world seemed to have used that heat to split into the three main kingdoms...two procaryotic, one eucaryotic...it seems that THEIR common ancestor arrived when it was cooler. 50 degrees or so. So that is now the temperature range in which these clever folk are seeking the materialist holy grail of what's called "abiogenesis" - where stuff that wasn't "life" became "life".

DNA, you see...couldn't possibly have evolved from RNA in those sort of temparatures. It seems that it had to have evolved before a mass extinction event, (which left only the thermophiles), and to have carried our chemical building blocks unused through the whole boiling epoch so that it could then be used as the information store that could make bodies.

Just as at the KT boundary, which killed the dinosaurs, and at the Great Permian Dying, the mass destruction of most life was as essential to evolution as all the cuddly stuff, like sex.

A final twist in the hierarchy is that the whole project of sequencing the human genome involves a heating and reheating of the source material...and so depends on using an enzyme called DNA Polymerase (to mark, isolate and multiply a selected snip of bases from a chromosome) that is derived from Thermus Aquaticus, a heat loving bacterium that lives in the hot Springs at Yellowstone, and can therefore survive the process.

(Thermus Aquaticus? Sounds like Monty Python made that up)

All this is fantastically challenging to my idea of "reality" at a far more fundamental level than I was expecting, and weird analogies with my equally patchy understanding of Hindu scriptures are starting to intrude uncomfortably on what I'm still pleased to call my "consciousness".

One thing for sure, "life" will never escape from quotation marks ever again. 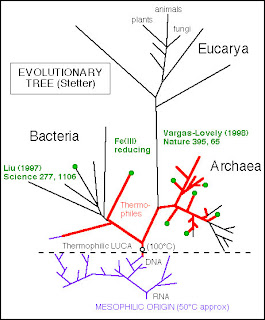 Posted by Playwright in the Cages at 12:14