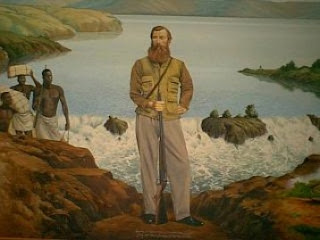 Following on from the philosophical ramblings in previous posts, I think I'm ready for a case study of living in two worlds at once. The source of the story I'm going to attempt to reconstruct is James Watson's racy and readable account of the making of the DNA business from inception to corporation (DNA : The Secret of Life Random House 2003). The immediate inspiration, however, is watching my colleagues here at the Forum, talented brainboxes to a man and woman, spending most of their time filling out funding applications. Whatever we think our jobs might be, our real occupation is seeking for the Great Money River.

(Hence the above illustration of John Manning Speke and his splendid beard "discovering" the place where the chaps in the background have been living for quite some time.)

"The Great Money River" fiction fans may recognize as the single most instructive image of capitalism ever devised...from God Bless You Mr Rosewater by Kurt Vonnegut Jr, who passed on to sit on the right hand of the Almighty not too long ago.

" forget about hard work and the merit system and honesty and all that crap, and get to where the river is. Go where the rich and the powerful are and learn their ways. They can be flattered and they can be scared. Please them enormously or scare them enormously, and one moonless night they will put their fingers to their lips, warning you not to make a sound. And they will lead you through the dark to the widest, deepest river of wealth ever known to man. You'll be shown your place on the riverbank, and handed a bucket all your own. "

Well, for a while there the Human Genome Project was a ladder down the bases to the Great Money River...allaying anxieties and promising immortality to the rich. There's a book I'm reading published at the height of the genomic hype in the 1990s (BEFORE the thing was sequenced/published/drafted, significantly) called The DNA Mystique by Dorothy Nelkin and M. Susan Lindee where they quote entertainingly from the claims of universality and truth which were the marketing hallmark of the enterprise.

The scientists themselves, unless they're chasing money, tend to eschew what some call "astrological genetics" - where there are held to be, for example, genes "for":

Nelkin and Lindee go on to say that "DNA in popular culture functions as a secular equivalent of the soul. Independent of the body, the genome is immortal. Fundamental to identity, DNA explains individual differences, moral order and human fate"

That was the pitch...that was the temptation. And it ignored the fact that most of the genome isn't "genes" at all - but junk. It turned out later on that the junk - repeats, introns - was fascinating in its own right. As a structure, as a moleculer, the human genome is a biography of all of our "species" encounters with viruses, and with evolutionary paths not chosen...and some of it, in terms of the spaces between genes (and hence how they work together in different organs, different stages of life) is essential to how the genes...the exons...work

...none of this was (or is) of much interest to the rich...who want power and cures...and hence offers no route-map to the money river. So why I'm following it above all God knows...

Handing over to Watson, remembering the early days of the project from which he was edged out: "Why should we sequence the entire genome - why bother with the junk? There is actually a quick and dirty way to secure a snapshot of all the coding genes in the genome using reverse transcriptase technology" - that is, working back from the messenger RNA to the coding sections of DNA - "Purify a sample of messenger RNA from the brain...using reverse transcription you can create DNA copies (called cDNAs) of these genes...and the cDNA's can be sequenced."

Not just sequenced (cloned) but OWNED...patented...liscenced.

And that's exactly what happened...and would have kept happening had not the publicly funded scientists not just started publishing them in open internet sources...

This meant that the new science od "Genomics" was already divided into two...one half (the sexy bit) was capable of being monetized, while the other remained "merely" a description of how things are and what it all means.

Which is, I think, a local manifestation of the dichotomy, or split personality, of all knowledge...which is what I think I've been going on about.

Cooperation and cheating, appearance and reality. An old story. Well...it's even older than you think.

I've been finding that "genomics" is altogether more nuanced, altogether more altogether than the hype threatened and promised. Genetics and environment interact unpredictably at all parts in the life cycle. Though this has the advantage of being true, it's a lot harder to sell. At the same time though, there is a holistic, fractional, metaphysic arising...a sameness, a conditionality which I find attractive. And I find it all over the place.

For instance, and to tie this entery together with stuff I wrote in earlier posts about human altruism and its viccissitudes, it turns out that it may well be that the only thing that has saved us from extinction (so far) may be that bacteria, like people, seem to have choices; to be able to choose to collaborate in groups or compete within groups. To "cheat"

(This harks way back in the blog to when I was writing about the problem of human altruism as tragically played out in the life and death of Geoprge Price...ie if we are all Darwinian individuals solely driven by reproductive genetic self interest, what makes us give money to Save the Whale? inter alia?)

I quote again...from up to the minute research:

"It has been suggested that bacterial cells communicate by releasing
and sensing small diffusible signal molecules in a process commonly
known as quorum sensing (QS). It is generally assumed
that QS is used to coordinate cooperative behaviours at the population
level. However, evolutionary theory predicts that individuals
who communicate and cooperate can be exploited. Here
we examine the social evolution of QS experimentally in the
opportunistic pathogen Pseudomonas aeruginosa, and show that
although QS can provide a benefit at the group level, exploitative
individuals can avoid the cost of producing the QS signal or of
performing the cooperative behaviour that is coordinated by QS,
and can therefore spread."

Bacteria, having been around long before us and being dominant in life on earth now and long after we've all succumbed to whatever it turns out to be in the long list of things we're going to have available for us to succumb to...cooperate and cheat. Just like we do. And if they got it together, we'd be a meat store...

Gives a man pause, shore nuff. I wonder how I could sell THAT?


Peter Arnott is Resident Playwright at the Traverse Theatre Edinburgh, Peter will be hosting a number of public engagements as he explores ideas and seeks inspiration for a genomics related play.
Posted by Playwright in the Cages at 12:35