Brother, Can You Paradigm?

I asked very early in the residency about whether or not this thing called "genomics" represented what’s called a paradigm shift. This is the confirmation of a scientific idea or principle that fundamentally alters both the general frame of ideas and the daily practices of science and was coined by Thomas Kuhn in his "Structure of Scientific Revolutions" in 1962.

I still don’t know the answer, but maybe it wasn’t quite the right question. There’s lots of work going on using the genomic understanding of evolution, and of development in utero, of personalised genetic diagnosis, of the making of nanomachines for targeted drug delivery, for the synthesising of micro and macro organisms for the purposes of research. Despite out straitened times, there’s still a lot of money around. There’s a lot of thinking about the economic potential of all this, and the potential impact on our ideas about identity, humanity…life itself.

Does this constitute a paradigm shift? Are we really asking different questions or arriving at different answers? Or are ideas lagging behind the day to day lab practice which certainly has shifted...is there anything, ideationally speaking, new?

(If the Higgs Boson turns not to be anywhere at any voltage, THAT's a shift...that's a rending of garments and a gnashing of textbooks)

As I head away from researching primary sources and towards scripting the first performed sharing of some ideas specific to the play that I’ve started to write, it is general ideas, worlds, that I am starting to imagine. A play is, in one way of thinking, a place. The theatre space in the imagined here and now is an arena, a world where personality and principle can fight it out. It is a place with rules…and it is those rules that I’m thinking about at two very different orders of scale.

First…that my life, our lives, a paramecium’s life, a dog’s life….rather than being actually existing things that share an abstract quality called life, are in fact all distinct abstract expressions of an actually existing thing…a thing that is called life.That matter itself, let alone living matter, is best metaphor-ed as “an island of localised order”…and is a temporary anomaly soon to be corrected…”in an ocean of entropy” - and if James Lovelock isn’t onto something with his Gaia hypothesis, I wish he was. 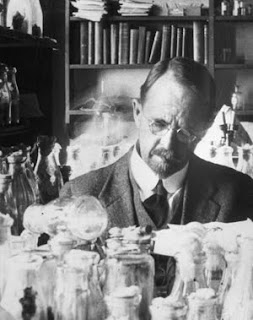 In terms of daily practice…that The Fly Room, the experimental space where the evolution of fruit flies has been messed around with by biology students since TH Morgan more than a hundred years ago, is where we live every day. That our daily practice of life is taking place in an experimental environment where we have no control and no guarantees of ever understanding what's going on and who or what the test is all about.

This is the world view my play will describe and that its characters will inhabit, and I’ll be reading and thinking about it and sharing it every so often…as I go looking around in it, testing it on their behalf.

And is that a paradigm? Is the world of a play a sort of paradigm? Where only certain actions can take place and are comprehended in specific ways…and if a character escapes from the world the playwright makes, does that break the play and make it unwatchable?

Or is that the shift we’ve been waiting for? Is that what makes it a hit?

Peter Arnott is Resident Playwright at the Traverse Theatre Edinburgh, Peter will be hosting a number of public engagements as he explores ideas and seeks inspiration for a genomics related play.
Posted by Playwright in the Cages at 13:35