The Fact of Totality 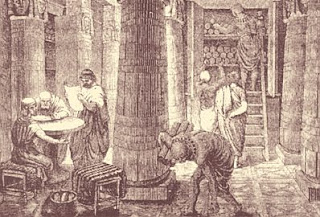 In the play I'm going to write, which is going to be called "The Fly Room", the characters are the inhabitants of a total library. Like in the legendary Library of Alexandria (of which this is a 19th Century German engraving of an imagining thereof), all the wisdom of the ages, including all the genetic information, is stored in one place, curated and researched by a genetically dedicated team, whose universe this library is.

Years ago, something happened. A power outrage...a war...they don't know. What they do know is that they have had no contact with the outside world for hundreds of years, and that, in the disruption, the total information the library held was scrambled...not destroyed, but differentially encoded. Now, at last, they've found the code...and are beginning to re-assemble and reinterpret the material of their world. The ideational underpinning of this sci fi scenario comes from my own experience of texts...and libraries. I was writer in residence at the National Library of Scotland before coming here...

As to texts, if 1859's Origin of Species was the Ur-text of evolutionary thought, then Erwin Schrodinger's "What is Life?" from 1944 was the founding text of what one might call the genomic view of life. The great quantum physicist applied what he had come to understand about matter to the special form of matter that "lives"...and his text was a direct inspiration to the generation of physicists turned biologists...Crick, Gamow, Szilard, Urey etc etc etc...who took his intuitions about the mechanism of inheritance and turned it to evidence and then an industry in the seventies and eighties...an industry that pulled clumsily, expensively and not always happily together to accomplish biology's equivalent to the Apollo missions to the Moon : the sequencing of the total human genome. 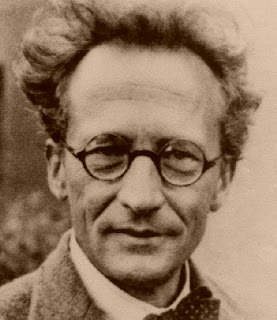 That text...the genome...is now itself a foundation and a map for a dizzying array of ideas and explorations, and, most crucially, mechanisms...life has in FACT as well as idea, become a machine. But the logic of all this still comes down the question Schrodinger asked in his introduction :

How can events in space and time which take place within a living organism be accounted for?

Accounted for, that is, within the materialist viewpoint of physics and chemistry, rather than a teleology - divine or otherwise. From the point of view of the physicist, what is strange about "life" is how orderly it is. Life is an island of anti-entropy. James Lovelock noticed the same thing...it's the basis of his Gaia hypothesis, where all life on earth needs must be considered as a single self regulating entity...jut like the individual organisms that make it up.

Now, I'm agnostic on Gaia. This is partly because I'm instinctively attracted to arguments that start by treating the familiar as anomalous. Hence I'm loath to dismiss it as easily as most right thinking materialists have.

(My theatrical master, Bertolt Brecht, said that the playwright must always treat what his or her society sees as self-evident as surprising!)

It's also because I have yet to come across the argument that would convince me that it is any more weird to regard life-in-total as "impelled by the survival imperative" than it is to regard individual cows, fruitflys or mushrooms as "impelled" to live and survive and reproduce...and self regulate. Genomics has demonstrated self-regulation, switching...choices being made by molecules in four dimensions at every level of natural selection from genes to populations...and at every stage in embryonic development into adulthood and beyond. So why is that impossible for "life" in the world? All of it? Real question.

Anyway, my librarians exist to be tortured by the certainty that they have access to all the information any conceivable civilisation could ever need...but that none of it is reliable. They only have their own inherited flaws and capabilities to go on and to judge with. What they are hoping to discover first is who has put them here and why. For they know that a library cannot, surely, have arisen by chance...I mean...if you found a watch lying by the roadside, could you not deduce a watchmaker?

Oh...there is a fab cartoon set about Schrodinger's famous dead-and-alive cat at: http://abstrusegoose.com/secret-archives/in-a-parallel-world

Peter Arnott is Resident Playwright at the Traverse Theatre Edinburgh, Peter will be hosting a number of public engagements as he explores ideas and seeks inspiration for a genomics related play.
Posted by Playwright in the Cages at 10:50