What an exciting week! 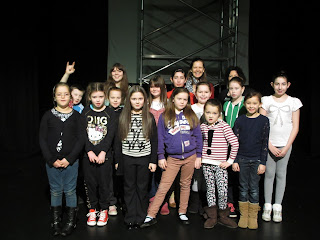 I knew that I had set myself a challenge in trying to put together a scratch pantomime with a conservation message and our preliminary discussions with LYT- Discover and North Edinburgh Arts highlighted complications I hadn’t considered such potentially low literacy rates. So I rapidly threw my draft script out of the window and realised that the children’s parts would definitely need to be improvised during the rehearsals but we might be able to use an adult narrator to keep the story on track – in case their creativity headed off somewhere unexpected!

Friday lunchtime rapidly approached and we headed out to North Edinburgh Arts Centre to see how many children would be taking part. Having had my expectations set rather low, we were thrilled when 13 children turned up – the lure of a trip to Edinburgh Zoo having proved a great incentive! And it was a great excuse to work with Sandie – Senior Education Officer at RZSS – and a not-so-secret panto enthusiast like me!

Having kicked off with some evaluation to get an idea of the children’s baseline knowledge, Sandie and I were excited to discover that the children’s knowledge was actually higher than we expected. A recent school project on rainforests and regular viewing of Deadly 60 being two sources they mentioned! Despite this prior knowledge, the children quickly got into the swing of the games, learning all about the layers of the forest, physically illustrating Gerald Durrell’s cobweb quote “The world is as delicate and as complicated as a spider’s web. If you touch one thread, you send shudders through all the rest. People are not just touching the web, we are ripping great big holes in it.”

Having picked out the key points from Mauritius kestrel story, we discussed how it could fit together with key elements from the Snow White fairytale – afterall they both live in the forest! The children were full of suggestions from making the kestrel one of the characters that is friends with Snow White to having the dwarves celebrate at the end with Gangnam style dancing! The last order of business of the day was casting, as you can imagine there were a lot of volunteers to be Snow White but after some great characterisations on the cat walk we knew that Tamara would be wasted on anything but the Wicked Queen and Kirsty would make a beautiful Snow White. 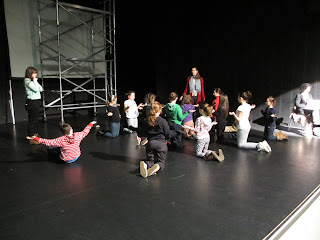 Friday evening the children got to relax while Sandie and I were very busy. I took the children’s ideas and put together a storyline that Sandie could narrate as “Granny” as well as sourcing various sound effects for key moments. Sandie had also been very busy and turned up with a veritable treasure trove of costumes and props and once the children arrived the first order of business was showing off the various costumes and props while John the engineer sorted our stage lighting for us!

As soon as the stage was ready, we jumped into rehearsals. The children’s energy and enthusiasm from the project was fantastic and they very quickly grasped the storyline and developed their characters – Granny jumped out of her skin every time the huntsman sneaked up on her!

With the dress rehearsal finished just as the performance time approached, there was no time for nerves as the audience were let in and the show began. The audience enthusiastically boo-ed and hissed in all the appropriate places, the children performed fantastically and Granny steered the whole ship majestically – once the children had woken her up!

We repeated the evaluation directly after the show and it was interesting to hear how the children used the kestrel to explain what endangered meant but didn’t mention it on their list of endangered animals. However when the questions were repeated a week later during their trip to Edinburgh Zoo, the kestrel did get mentioned as being endangered as well as being used in the explanation again. They had also remembered a number of pertinent facts about the kestrel’s conservation such as the fact that it went down to just four birds and that the DDT had travelled up the food chain.

It was such a thrill to work with the children and see how enthusiastic they are about animals. Perhaps by offering a zoo trip as the incentive we may have encountered a natural bias towards children who are interested in animals, but the way they embraced the story of the kestrel is very encouraging and I would hope that the energy of their performance had a similar effect on their audience!

Pantomime as a medium allows you to produce rough and ready performances in a relatively short space of time and by engaging the children with the story and science behind the kestrel’s survival, hopefully the message entwined with the story will stay with them for a long time. I certainly found the experience very memorable and hope to repeat this process with other groups in the future.
Posted by mobo at 14:27