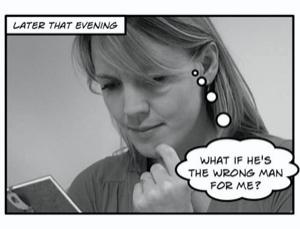 Having been intrigued in my first week by the mention of ‘the genetics of scent and attraction’, I must admit, I did kind of brush it off as a novelty subject. However, after a conversation with visiting fellow Craig Roberts, this intrigue quickly developed into serious consideration and my new found interest in genetic dating sites was sparked. The actual implications of this genomic information being used by dating agencies became apparent, and so many questions sprung to mind.

What happens if you are already in a relationship, and, through fateful curiosity, decide to check whether you are compatible with regards to making immune resilient babies? What if the test turns up any other potential hereditary genetic issues? If MHC compatibility is AOK, but the chance of a different genetic disorder are high- what moral obligation do companies dealing with genetic information have to inform of other findings? Or is it only the MHC genes which are assessed? If so how is the testing of individual genes regulated and how are the results stored?...


After reading The Economist’s article from 2008 A new kind of dating agency relies on matching people by their body odour, I was curious to see that scientificmatch.com (temporarily unavailable) was