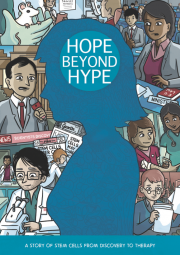 
'starts with the true life story of two badly burned boys being treated with stem cell generated skin grafts in 1983. We then follow the successes and setbacks of a group of researchers working together to use stem cells to cure blindness, whilst being introduced to knotty issues that are part of the process, including stem cell regulation and the controversial ethical issues surrounding the subject. Whilst some of the story lines sound like science fiction they are in fact all true, despite the fact the script was written by the well-known Scottish Science Fiction writer, Ken Macleod. Comic book artist Edward Ross illustrated the script with his clear, friendly and attractive artwork, whilst stem cell researchers from OptiStem provided the real-life examples of their research and experiences.'

The comic was produced by a team led by Cathy Southworth, Optistem and EuroSyStem's Public Engagement, Outreach and Communications Manager, who works at the MRC Centre for Regenerative Medicine. She came up with the idea, recruited the team, showed us around the marvellous building in which the Centre is housed, introduced us to her colleagues, and arranged the immense privilege of an hour for us all with stem cell pioneer Professor Michele De Luca. 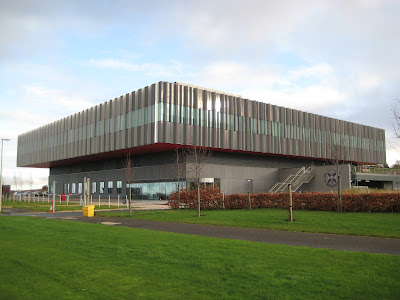 Cathy and I consulted graphic-novel guru David Bishop at Napier, who explained how comics scripts are written and suggested books to read. I went off and read them, then wrote the script. Comics artist Edward Ross and his colleague, Glasgow University PhD student Jamie Hall, did the design and artwork. Meanwhile Edward and Jamie were just finishing a rather longer comic on malaria, and Edward and his wife were expecting a happy event (now happily eventuated, as you can see from the pram handle in the picture below), but they took it all in their stride. The script (and some panels - none of us will forget the blastocyst picture) went through several iterations, as we and some of Cathy's colleagues tore successive drafts to shreds.

For all that, we finished on time and in budget, and it was a proud moment when we all got the finished article in our hands. 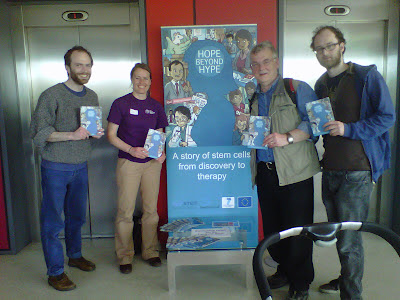