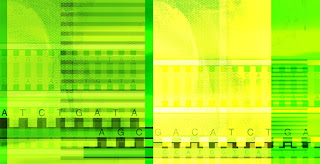 Genomics – everyone keeps asking me to define what that means. I find it interesting that after a year as writer in residence with the Genomics Forum, I find that no easier to boil down into a few words than I did a year ago.

I can talk with a little more authority about a lot of STUFF to be sure. About a genetic viewpoint on the history of life on earth at one end of the field…and the industrial production of knockout mouse mutants at the other. Because genomics, I find, is a field rather than a thing, an arena rather than a single technique or idea. An awful lot depends on who you talk to.

Of course, as preminisced by Schrödinger’s “What is Life” in 1944, genomics can be said, among other things, to be the neat pink bow that unites the life sciences with all the rest of them…chemistry and cosmology included. And so it does…but so did, really, “genetics”…the atomic theory of inheritance as developed from the Fly Room of TH Morgan to the modelling of Crick and Watson (supported by the X Ray Crystallography of Franklin and Wilkins) and the phenomenology of Jacob and Monod…all the way through the beginnings of genetic engineering ion the seventies to the “sequencing” technology of the 90s…to the current unruly explosions from bio banking to Nan robotics.

What is “new” about genomics as opposed to “genetics” seems to be something to do with nuance, with a kind of holistic, “soft” appreciation of life’s interdependencies and complexities. But this may have more to do with our contemporary zeitgeist of environmentalism plus fatality than it does to do with a classic paradigm shift in Kuhnian terms.

In any case, “arenas” of different and conflicting worldviews are where playwrights live, so I’m not unhappy that I’ve ended up pretty much where I began…with the caveat that there is something disabling about being open to too many possibilities. To going down the “cabaret” line we explored last week… writing a science fiction comedy about librarians getting a few laughs and playing the harmonica…maybe…or writing a “studio” piece about the guard room outside a genetic testing centre…(kind of Kafka esque) or maybe just writing about a family where a beloved son has died for reasons that no one is able to explain…

Perhaps what this year has done for me more than anything is cement the duality that afflicts me with regard to understanding stuff while living with stuff as being the common currency of science as well as “real” life – that the duality of our nature is in us and always has been; that everything lives twice; that ambiguity is what life is…and for a playwright, what could be a happier conclusion than that?

Peter Arnott is Resident Playwright at the Traverse Theatre Edinburgh, Peter will be hosting a number of public engagements as he explores ideas and seeks inspiration for a genomics related play.
Posted by Playwright in the Cages at 12:28