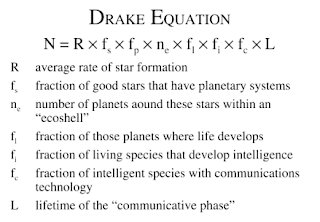 This is an illustration of the Drake Equation, which is a mathematical model that has been used since the 1960s (when CETI was set up) to calculate the number of intelligent life forms "out there" who might have something they wanted to say to us. Even a brief hello...or maybe something in exchange for the transmissions of the X Factor we're currently beaming into eternity. Like a death ray if there's any justice.

The first three numbers, entirely unfeasibly at the time of its first formulation, are creeping up and up and up. As measured by gravitational wobbling and periodic dimming of stars, the number of planets found is now in the hundreds, and those within the "ecoshell" as pushing half a dozen...probably. Even the fourth number, given all the water and vulcanicity which seems to be around in our solar system, is at least theoretically not zero...probably.

So what's keeping them? When will ET do his duty by us? And save us from ourselves?

Well, the more I read in the converging disciplines of developmental biology, chemistry, paleontology, climatology...and genomics, the bigger the conceptual gap between fl and fi, the fourth and fifth terms of the equation, seems to be. And the more apparent it is that we have to look to ourselves a bit sharpish for salvation.

Andrew Knoll, in his magnificent, every five pages mind-boggling ""Life on a Young Planet" , summarises it like this: "While the story of evolution undoubtedly includes human beings, it is not about us...life's history is a gripping saga of cyanobacterial survival, a cautionary tale of trilobitic fall, or the inspirational story of yeasts finding sustenance in rotting fruit...Whatever the merits of viewing earth as our world, we could not persist without the bacteria and algae, as well as the plants and animals"

The number of things that had to go right, and keep going right, for life not only to exist but for life to exist with the right chemistry for getting on for 4 billion years, with water having arrived here at just the right time, for the temperature to have ranged so narrowly, for the right abundance of oxygen and calcium to coincide for the formation of skeletons (a prerequisite for diversity of form and function), leaves a yawning, maybe more or less unbridgeable gap between there being life and there being complex, multi-cellular life...leave alone all the stuff that's happened since the Cambrian explosion gave rise to plants and animals...including mass extinctions and climate change that has fortuitously coincided with mutations in wheat grass to let us discover agriculture which is the sine qua non...etc etc etc...and I didn't even get to beating Hitler, which was helpful

Man made global warming is the least of it. Take a look at this graphic. 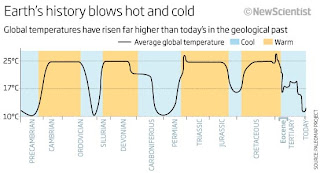 The present day is at the right hand end. As you can see, it's pretty damn cold at the minute...earth has usually been much, much hotter than it is now. It is, nicely for us, a bit parky.

And before Nigel Lawson gets all excited and says "Well there we are then...fire up my Hummer immediately", just because climate change is natural doesn't mean it's good for us. Our civilisation has emerged in a period of warming at the tail end of a glaciation period (whose end we are accelerating) and the climate owes us diddly squat.

God may be dead, but his shadow falls over us whenever we imagine that we are "meant" to be here. Meant by whom? Ourselves, of course, is the only possible answer to that question, which means that, as as ever, we are, like all forms of life ever, on a cusp between altruism and individuality as a survival strategy. We have to decide who "we" are.

The language of evolution has been hijacked ever since Darwin to justify the rich in doing whatever they feel like doing and paying no tax in the meantime. Progress and natural selection have been culturally identified with psychopathic behaviour in the marketplace and on the battlefield. Just like Divine Providence once upon a time.

The fact, however, is that the tension between cooperation and competition as alternatives WITHIN taxonomic groups is as universal as DNA itself...more so. I am finding it possible now to conceive of all our political conflicts within this view of life, and to read in the graph of climate change a political imperative to identify the values that will alone protect us from the next set of depredations of the rich, for which, honest to God, the latest unequal division of economic pain is only a minor rehearsal. If people like Murdoch are still in charge when the whip comes down, then the survivors are not going to be nice liberal folk like you and me...they're going to be unpleasant beyond the dreams of Al Quaida. There's an unnatural selection coming, and we really don't want those people making the rules.

I observe too, tangentially, that just as it was possible for Dante Alighieri to write a poem that encompassed the universe in 1309, for the first time since, that holistic view is possible again. And it's called human science. As above so below...uncertainty at every scale - convergence and homogony and happenstantial selection are everywhere you look. It is breathtaking and beautiful to be alive right now.

Science awaits its Dante. And climate change its Karl Marx. I don't imagine that's a job description I could fill...I'm just writing an undivine comedy about genetically engineered librarians. But to finish my blogs before the hols, I did want to attempt a brief panegyric.

We live on rare earth
At exactly the right time
We should act like it.

There. Stick that Boson up your accelerator and detect it.

Happy Holidays.
Peter Arnott is Resident Playwright at the Traverse Theatre Edinburgh, Peter will be hosting a number of public engagements as he explores ideas and seeks inspiration for a genomics related play.
Posted by Playwright in the Cages at 10:01