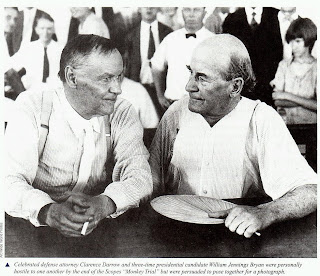 At 7.30 on Friday Sepember 30th I'm doing an event with actors about these gents here...an exploration of the seminal God and Darwin slugfest in Tenessee in 1925. These ornery, gallused old bastards are Clarence Darrow and William Jennings Bryan - and we'll be performing their words...and those of their fictional counterparts in the famous play and movie "Inherit the Wind" as well as dipping into more recent rematches between men and monkeys.


Meantime, we had a terrific meeting last Thursday, I thought, at our "Translating the Genome" gathering. I went away with my head buzzing, and many thanks to all who came and saw and contributed.

Below is a partial result. Another excursion into anthropoesis. Also brought on by devouring John Banville's great "Dr Copernicus" novel over the weekend.

Copernicus, like Darwin,
Could only see what everyone saw –
What he had to conquer, catastrophically
Was the certainty that
All of it was meant for him to look at.
That “he” existed.

The radical decentring
That made such sense
Of the recessions of Mars
(for example)
Required him to destroy himself.

He was not just a watcher of planets
He was on one. Darwin didn’t just
Collect things. He was one.

Intuition is all we have to go on.

But this frightful sphere of everything…

To make sense of everything
The centre is everywhere
and the circumference is nowhere, so
Centre is not the problem -
“The” is the problem.

Depressives, paralysed with horror
Are living in the real world

God, like physics, stone and water
Does not need to know His name.

Our original sin against being
Had something to do with names.
With creating things twice over – a miracle
And a fleshly trap, this seeking.

Star-gazing, we envy the couple in the next room
Drinking, we are troubled by infinity

We talk fondly about losing ourselves
And taste this freedom in crowds
And return to ourselves resentfully.
Yet in these little joys
We know there is a death,
That the only cure for mind
Is namelessness.

Between 1300 and 1312
Dante Alighieri
(Whose legs are black and hairy)
Wrote a poem about everything
No one since has been able to do that.

Now everything is easy for poetry again.
In us is a map, a machine, stuff made of stuff
the same stuff as all the other stuff
the bosons and muons and so on.

So we can look at life like stars now
As if it had nothing to do with us.

Most of everything isn’t anything at all.
Which is a clue
And seen from here it’s all expanding
In every direction all at once
That’s a clue too.

there was no matter
So space and time didn’t matter.
Everything and nothing were the same.
Without matter, there could be no distance
Between matter. Nothing changed.
So there was no time. Then

There was matter
With distances between it, changing
All the time.

And that was the universe right there

8.
(The tricky thing to grasp is that everything always was everything and still is and always will be.
And that it is the expansion into space and time and stuff and spaces inbetween stuff and time
that was and is anomalous.)

The apparent expansion of space and time
And all the lumps therein
Is the diffusion of an initial anomaly.
More of a big oops than a bang.

By way of correction, happily
This lumpiness can’t last
Eventually, expansion is infinite
(one might say it always was)

Eternity is eternal just until the rocks and beetles and men and women
Are broken, spread into molecular, atomic, then sub atomic constituents
Over so much space and time it’s as if nothing was there
and there was nowhere no-things might have been.

No matter - so no mass or energy
So no distance between matter - so no space.
No change - so no time.
The singularity of the zero restored
Everything - the same as nothing.
And nothing ever happened.

Call that God or cosmos if you like,
I’m fine with it. If that’s how it is.
But it’s not you or me.

There is no more to say on the matter.


Peter Arnott is Resident Playwright at the ESRC Genomics Forum April 2011 - April 2012. Appointed in partnership with the Traverse Theatre Edinburgh, Peter will be hosting a number of public engagements as he explores ideas and seeks inspiration for a genomics related play.
Posted by Playwright in the Cages at 15:36