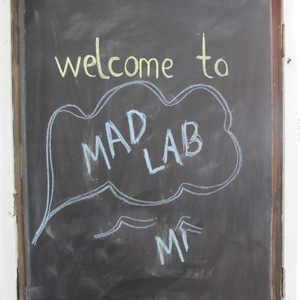 On Thursday 30th August I took a wee trip down to Manchester to play with some E.coli, all in the name of events research. When I say ‘play’, I mean partake in some citizen biology, or DIY Bio for those in the know. It’s all the rage these days in the US and increasingly so round the rest of the world. The playground was Manchester’s MadLab’s new hackspace and the gamesmaker (topical I know) was their DIY Bio group led by Asa Calow, a computer scientist by day, an amateur biologist by night. The session was titled Self-cloning Bacteria (AKA genetic modification for beginners) and it basically involved genetically modifying E. coli and if successful, it would turn bits of the agar plate blue.


“What on earth is DIY Bio?” I hear you cry so let me tell you a bit about it. It’s a movement that originated in the US and it’s a form of citizen science i.e. science carried out by amateur scientists or in some cases, non-scientists. Do It Yourself Biology has been made possible by the reduction in costs of lab equipment in the last decade and its origins is very much in line with hacker culture  (not the malevolent hacker that the media has portrayed, but more the geeky finding-out- how-stuff-works-under-the-cover hacker). DIY Bio is about anyone and everyone practising biology outwith a professional laboratory whether it’s in a garage or hackspace (communal workshop space). Why would people do this? It could be for fun, as a hobby, for the pursuit of scientific knowledge or a chance for people to pursue biology outwith academic or professional institutions.  For more information about the movement, check out www.diybio.org 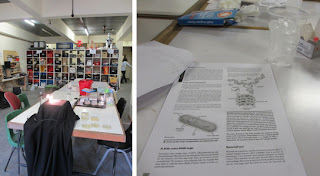 Manchester’s chapter of DIY Bio is “dedicated to making biology an accessible pursuit for citizen scientists, amateur biologists and biological engineers who value openness and safety." It’s based at MadLab http://madlab.org.uk (Manchester’s Digital Laboratory, a hackspace where people from all backgrounds can get together to explore, learn and share) and started off as a year-long project supported by Manchester’s Metropolitan University and the Wellcome Trust. Although the funding has ended, MadLab is continuing its DIY Bio activities whilst seeking alternative funding. They have monthly meetings/events and I was delighted to have a chance to attend one to find out what it’s all about.

The session I attended had five people other than me participating. It’s a bit smaller than the usual  (there’s usually about a dozen or so people) but I thought it was great to have a smaller group as it was nice to be able to chat to everyone. No one there had any biology background and in fact, there was bizarrely a dominance of people with physics backgrounds (me included). As the session started, Asa explained that we would be using the Transformer Protocol kit from NCBE (the National Centre for Biotechnology Education based at the University of Reading) and this toolkit includes E. coli (grown 3-4 days in advance), plasmid DNA  (which Asa had to go home and retrieve from his freezer), pipettes, gloves, agar plates, spreaders, tube things etc… a trip down memory lane to A Level Biology lessons. The lab space was the large table at which we were sat and we had to ensure that we do not pick our noses, rub our eyes etc in the space. We had a hazardous waste bucket which all used materials must be discarded in which will be nuked by concentrated bleach (Domestos to you and me) after the session.  The strain of E. coli being used was a feeble harmless strain so there weren’t huge health and safety issues present but we were all told to use common sense and ensure that you don’t get it on your clothes and to make sure we used anti bacterial hand cleaner afterwards.

In a nutshell, we were using a transformation buffer and heatshock to modify the DNA of the E. coli bacteria with plasmid DNA. If modified correctly, the E. coli will produce a by- product (lactase in this case) that will turn the agar blue. As this is DIY Bio after all, the cold shock at the start involves ice in a plastic beer glass, the heatshock in a water bath is boiled water (using a kettle) reduced to the appropriate temperature in a saucepan, and the incubator is a Styrofoam box with a heat lamp covered by a black bit of cloth. Much laughter and a few hazardous spills (cleaned up very quickly with anti-bacterial spray) later, all our plates were in the incubator. Results were not immediate however and Asa informed us that he will email us with pictures of the results after the 2-3 day incubation period.

I wasn’t holding out for successful results with my plates as I discovered I wasn’t very good at pipetting (I’m sure I sucked up all the wrong quantities of stuff) and lo and behold, a few days later, I received the email from Asa. Mixed results, Florence’s plate was the only one that showed a positive result… a tiny tiny blue speck so hurrah, it was a success! Asa very graciously explained that everyone else’s failure was due to him not preparing everything well enough which was very kind but I would say in my case, I have no shame in admitting it, it was just pure incompetence! But then a day later, Asa sent another email saying that just as he was about to destroy all the plates, Flo’s had gone into overdrive and there were many more blue specks and there was another speck that appeared on Ian’s plate. Definitely a resounding success methinks.

So what did I take away from this experience? Personally, I thought it was just a great bit of fun for anyone interested in science. Everyone was super friendly and it just seemed like a brilliant leisure activity. Would DIY Bio result in a cure for cancer? I don’t know, but Asa did tell us there were some groups in the US that were doing some seriously cool stuff and one group had even gone as far as holding clinical trials for a drug. Is it a cool way to get the general public interested in biology? Most definitely!

Why don’t you come see for yourself? Asa and his MadLab crew will be up in Edinburgh for our Festival of Social Science event, The Revolution Will Be Bio-Based on 10 November. They’ll be doing some demos and Asa will be speaking about the potential for DIY Bio to ignite young people’s interest in the life sciences. We’re just finalising the details for it at the moment but it’s going to be an afternoon of demos, exhibitions, installations and discussions about the wonders of biotechnology and the DIY Bio movement will play a big part in the proceedings.