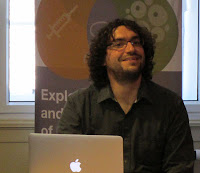 A new, strange breed of people has come to life. They live in major European, US and Asian cities. They provoke dreams and fears, they talk science and politics. Their object of interest is life; and hacking and tinkering with biology is what they do. They come, in fact, in various guises and call themselves “biohackers”, “biopunks”, and “DIY biologists”.

Should we be afraid of them or not? Do they represent a danger or can they empower citizens? These are some of the most common questions asked when biohackers are being discussed.

But there are other questions we can ask, for example: who are these biohackers and biopunks and how many of them are there? Do they have a tangible influence on science, politics and society? Or, if it is too early or too difficult to answer such questions, we can still ask: which visions of science, technology and society do they promote? What do they want to change? Which new institutions, forums, places, activities, objects, do they want to create?

Questions like these are, I think, a way to avoid reducing the discussion about biopunks/hackers to common dichotomies: safety vs. danger, establishment vs. anti-establishment, experts vs. citizens, responsibility vs. anarchy, innovating vs. tinkering, closed vs. open. The danger is to assume that science is all the former, and biopunks/hackers all the latter. Science on the one side of the ring, punks on the other side of the ring.

The story is more complex. Both institutional science and DIY practices also co-evolve, influence, and probably even need one another. But we must dig even deeper than that. Around the notions of garage biology, DIY biology, and biohacking, new and rather open collectives of people, ideas and objects are currently materialising. We might be witnessing the emergence of “citizen biotech-economies” (Meyer, 2012).

In order to do biology in a garage at home or in a hackerspace, hackers and bricoleurs depend on a whole economy of objects, knowledge, networks, and people. They depend on other people, on scientific institutions (even if indirectly), they rely on the sharing of information, on the circulation of tools, on Internet platforms, on emails, on donations, etc. These economies are usually non-market economies: most information and innovations are accessible for free. And, while money is not the key driver for these economies, they give rise to, and provide channels for, new ‘styles’, identities, ethics, and values for doing science.

The infamous album Never Mind the Bollocks, Here’s the Sex Pistols (1977) can actually offer us some food for thought for reflecting about biohackers and biopunks. We could, on the one hand, have long debates about whether that album’s music is actually good or bad, whether its messages are outrageous or creative, disrespectful or liberating.

The fact is: whether we like it or not, Never Mind turned out to be a highly influential album, a milestone in punk and rock music. It changed music. Punks, nowadays, are a recognisable figure in terms of music, fashion, revolts, and anti-establishment attitude. Will biopunks bring about a similar cultural revolution in science and technology? Will biohackers change, and have a tangible influence on, scientific practice, scientific institutions, and technologies?

They might. Or maybe not: “hackers today prefer to be “Anonymous” and collective force, tricksters and jokers rather than typical revolutionaries, with an agenda intentionally left open” writes Denisa Kera (2012).

For those readers interested, and who will be at the 2012 Edinburgh Book Festival, an absolute must is the session that will be dedicated to do-it-yourself biology on August the 13th. Panellists are: Alessandro Delfanti from the University of Milan, who has done his PhD (Delfanti 2010) – and who is about to publish a book – on the subject; Jane Calvert, a researcher from the University of Edinburgh who is very active in examining the field of synthetic biology from a social science perspective; Ben Hammersley, editor of the magazine Wired UK; and Pippa Goldschmidt, a writer, who will chair the session.

Kera, D. (2012) ‘Hackerspaces and DIYbio in Asia: Connecting Science and Community with Open Data, Kits and Protocols’ in Journal of Peer Production, Issue 2

Meyer, M. (2012) ‘Build your own lab: Do-it-yourself biology and the rise of citizen biotech-economies’ in Journal of Peer Production, Issue 2