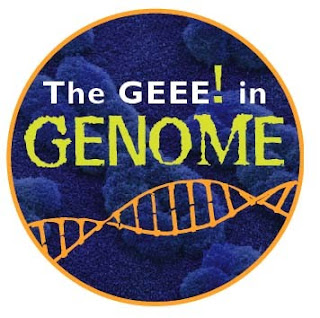 Entirely contradicting what I said in my last entry that I'd be talking about this time, I'm going to put a bit of a footnote to my performance last week at the Traverse, where we were exploring the good old God vs Darwin chestnut once again. First by a bit of back reference to my previous residency at the National Library of Scotland and the archive of Darwin's publisher John Murray.
I also apologise to anyone trying to read this about how strange it looks...the images are straining "Blogger" technology...which is oddly apposite.
Anyway …in the same month as John Murray
published On the Origin of Species - November 1859 - He also published an encyclopedia of the bible. That’s right…an encyclopedia -an alphabetical taxonomy -Of every place, plant, person
And Deity Mentioned therein.
The book
Is a testament, a rewriting or re-ordering of the scriptures
In taxonomic, "scientific" terms.

It’s fab, by the way…I especially enjoyed the entry
On “Adam”

It seems bizarre to us, but at that moment, it wasn’t.
Science for the Victorians, with very few exceptions
Was the third revelation of God’s works
There was the book of the Bible, then there was the Book of Nature
And the Book of Science as revealed to Issac Newton

Was a revelation of God's Laws of Motion, Gravity etc.

an Encyclopedia of The Bible is testament
To this oneness of all knowledge
And the working of those Laws
in the flora, fauna and personae

Of the Bible.
See?

Phillip Gosse published this:
“Omphalos”…which, like Darwin’s short synthesis
Is a total explanation of life…
Written by a distinguished and outstanding naturalist

Here he is with his boy and his book. 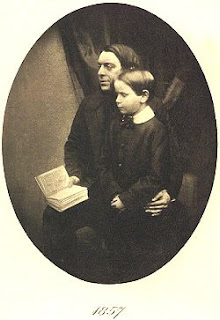 The boy is called Edmund...and his book about him

And his tortured relationship with

Gosse was starting exactly where Darwin was.
The evidence of the variation of life
Was inescapable. So it had to be explained.
But where Darwin explained variation according to deep time
By life having evolved over millions of years
Gosse explained the same thing
By means of an instantaneous creation of life
That APPEARED to have a history.

(Omphalos means belly-button - the old question being
Did Adam have one or not, not having had a mummy.)
Gosse said he did have one…
which means Adam was created as IF he had been born
Had been a foetus, a toddler, a boy.

God, Gosse said, must have created the appearance of time
…some females pregnant...some seeds as well as trees
Wear and tear on the teeth of hippos
As if they had been eating
And so on. As if things had a past

The world must have been created
(most famously)with dinosaur bones in the ground
that looked
As if they once had lived
a loooooonnngggg time ago.

If creation had really been in an instant...
of COURSE God had to have created things in the middle of things

And as a man of Abrahamicly heroic faith
This wasn’t a problem for Gosse…
He thought that what he was achieving was
A definitive grand synthesis of faith and natural observation.
His book is exciting, excited, exultant.
(and well written...including his taxonomies and descriptions
of plants and animals)
He KNEW he had to be right
Just like Darwin.
BUT
His book ruined him…it was a joke
Vicars and naturalists crossed the street to avoid him

Actually…it’s the only account
of designed, instant, total creation
that makes ANY sense.
(Or that's coherent anyway)
It's the only honest and rigorous way
to believe in a literal creator God and see the world
in a modern scientific way.

My “History of Ideas” point
Is that religion as science only came along
Post Francis Bacon, post Descartes…

That is…it IS a kind of science
It's of scientific times
Biblical literalism - fundamentalism -
Which we think of as a medieval throwback
Is a purely modern phenomenon born
Of that third revelation.
No...it is.
Like Al Quaida, it's modern.
And, like Al Quaida, it makes a certain kind of sense.

The famous Bishop Ussher of Armagh
Who calculated the date of the creation by adding up the ages
Of everyone in the Bible and counting backwards
(arriving in October 4004 bc)
Was thinking like a MODERN
in MODERN times - after Bacon, after Descartes
and at the same time as Newton.

It wouldn’t have occurred to Augustine
Bishop of Hippo in the fifth century
To set a DATE for creation
And he was a smart cookie too.

So what? You might well ask.
Just this. Thought and language
including genomics and all that
are time defined and limited.
to the 21st century in this case.
And the language of evolution
Was couched in a time when
We believed in progress
The 19th century
From lower to higher forms of life
Yeah?
The paradigm proposed by genomics
I find
Will have none of it.
Blows progress out of the water
as definitively as Darwin erupted under the good ship Gosse.

There is no progress anymore
In economics, society...anywhere
Which is why genomics is the science of our time
no lower or higher

and I think the language of "science"
can't cope beyond the specialists
and tries with 19th century language
in vain to do so.

And I am struggling with the language too
with which I can think about this
let alone express it
let alone write a play
Because it's so NEW, damn it!
And I am wondering this morning
if my Abrahamic Faith
n the dramatization of everything
is as redundant as Adam's Belly Button.

Peter Arnott is Resident Playwright at the ESRC Genomics Forum April 2011 - April 2012. Appointed in partnership with the Traverse Theatre Edinburgh, Peter will be hosting a number of public engagements as he explores ideas and seeks inspiration for a genomics related play.
Posted by Playwright in the Cages at 12:18