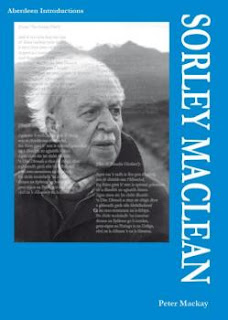 After enjoying the 'Nothing but the Poem' event on Sorley MacLean, I couldn't miss Wednesday's major session on his work at the Book Festival, marking the centenary of his birth. Again the event was packed and all the tickets sold out; again the proportion of Gaelic speakers in the audience was low, and again the audience was mainly of an older rather than a younger generation. Aptly enough, a great deal of the discussion concerned the 'doube-edged sword' of translation and the parlous situation of the Gaelic language.


Chaired by Mark Wringe, the panel featured Scots language scholar Derrick McClure, who has translated MacLean's Dàin do Eimhir as Sangs tae Eimhir; Peter Mackay, journalist, poet, and author of a new biography and critical introduction (2010); and novelist, poet and scholar Christopher Whyte, who has recently published the first complete text of An Cuilithionn (The Cuillin) as MacLean wrote it in 1939, and has with Emma Dymock produced a forthcoming (October 2011) Collected Poems.

Here are a few notes from what they said.

The outstanding Gaelic poet of the 20th century, MacLean is far more widely read in English than in his native Gaelic. This results in complex problems. Hearing him in Gaelic without understanding the language can convey what's lost in all translations - the music of the original - but it can lead to reading and hearing him as a traditional bard, whereas for a Gaelic speaker what is remarkable is how non-traditional, innovative and radical his use of the language is. You don't expect in a Gaelic poem an invocation of the Red Army as a response to the Clearances.

Self-translation, from a minority language into the language that has defeated and marginalised it, is never innocent - it's done under pressure. And MacLean's self-translations are not always in themselves poems. Translating him into Scots means using the resources of that language, its spiky sound and harsher rhythm, to make a poem that can stand beside the original. MacLean's work has bought Gaelic fifty years of life, but the language can only survive in conversation with other languages.

The event was itself a fine example of that necessary conversation.