Unnatural in the Rain 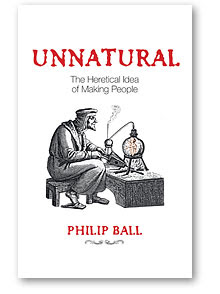 Yesterday to the Ediburgh Book Festival, there to meet and talk to author, (The Music Instinct, Bright Earth, Critical Mass), former editor of Nature...and theatre maker...Phillip Ball.
He has a new book out called Unnatural: The Heretical Idea of Making People. This is his excellent and surprising website: http://www.phillipball.co.uk/.

He was also polite enough to give me fifteen minutes of his time...without really knowing what for...and I demonstrated why playwright is a total job description for me by entirely failing to properly activate the recording device to properly capture his graceful and pithy answers to my questions...which were more like setting up the cue ball for Hurricane Higgins than in any way interogative.

His answers ranged across his range in the book: a history of anxiety, you might call it, and a demonstration that what worries us about cloning and stem-cells is not so much techne as psyche...and has very, very deep roots. In the book he goes from Genesis through Plato to Paracelsus (he did a play about him) and beyond: the Golem, Frankenstein's monster...The book is a contribution to the history of ideas, but also of feelings, anatomizing our fears: our fear ultimately of ourselves...and what we make of ourselves..."anthropoesis" is his word...and I shall be dropping it into sentences whenever possible. It may even be a suitable bewildering title for a play...

Phillip was also the star attraction at the Genomics Forum discussion along with the artist Daisy Ginsberg and our own Steve Yearley - the event chaired by Sarah Parry from Edinburgh University's School of Science, Technology and Innovation.

As the rain battered on the Spiegeltent in an irresistible metaphor of the vanity of human wishes, moral judgement was dissociated from taxonomy, Aquinas' doctrine of the equivalence of the good and the natural was dissected, nature was reified and complexity woken up to...the thing he said that I scribbled down in the biggest letters was that what can be done in science is not the same as what can be understood...which took me back to a lecture he gave on the ethics of nanotechnology some years back...where he defined science as what scientists do.

I've always been a sucker for pragmatism.

But then there was the GP who spoke next to last from the audience...

(just before the climate change denier/conspiracy theorist...at whom one internally shouted - have you LOOKED outside the tent???!!! They're going to have to do this on a HILL soon...)

The moral and the physical are inextricable...whether our reflex is that nature knows best, or science knows anything...and our imagination, Phillip said, siezes on what goes wrong far better than it understands what goes right.

Unlike mine, his is a very sane voice. And the rain still falls.

Posted by Playwright in the Cages at 12:15