Fiction shines a light on the Universe 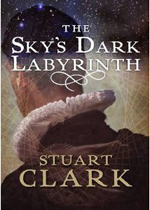 Tomorrow Stuart Clark is talking about his novel ‘The Sky’s Dark Labyrinth’, the first in a trilogy about the birth of modern astronomy. This is Stuart’s first novel but he’s an experienced science communicator and has written many non-fiction books. I caught up with him before his talk to find out more:


You were a professional astronomer for some time before you moved into science communication – why did you make that move?

I realised that I was more interested in the broad pictures of astronomy than in the nuts and bolts of doing research – debugging computer codes and arguing over marginal data held no appeal for me. So writing about astronomy provided a more natural fit.
There have always been two passions in my life: story telling and space. Story telling developed into writing, and my interest in space turned into a BSc and then a PhD in astrophysics.
I self-funded my PhD by writing for science fiction magazines, reviewing films and interviewing actors and directors. I even wrote the video sleeves for Star Trek for five years – it was that job that largely funded my PhD. I was also asked to write my first astronomy book at that time, Stars and Atoms, an illustrated family encyclopaedia.
However, I think my research allowed me to develop the critical eye that I use to get to the bottom of stories. And my interest in story telling allows me to present it in a hopefully accessible way.

And then you made another move – to fiction. How big a jump was that?

When I began writing The Sky’s Dark Labyrinth it didn’t feel like a big jump at all but looking back I realise it was a leap into the dark.
Having said that, I’ve always written fiction. There are a couple of finished and half-finished science fiction novels lurking on my hard-drive and a detailed synopsis and sample chapters for a novel called The Stone Ocean about Mary Anning and her fossil discoveries. However, Tracy Chevalier beat me to that one with her wonderful Remarkable Creatures.
I’ve been a voracious reader of fiction all my life, starting with science fiction. Now I read widely across genres and the main stream, looking for stories that resonate. As for the writing itself, it is very different. You simply can’t ‘tell’ in fiction, you have to ‘show’. Journalism or non-fiction writing is more direct; you have to tell as clearly as you can. I’m not saying either is better. They suit different stories. I have a number of ideas for possible books that would have to be large-scale narrative non-fictions rather than fiction. But fiction is something I’m concentrating on at the moment. I’ve just completed the second volume of The Sky’s Dark Labyrinth and I’m looking forward to starting the third book in the autumn.

Your first novel is actually a fictional account of real historical events. Why did you decide to tackle this in a fictional format?

The Sky’s Dark Labyrinth came about when an editor mentioned to my agent that the history of astronomy was like the plot of a thriller. It had danger, power plays, rivalry, intrigue. We found this fascinating and perhaps a way to move popular science onward.
So I began to think seriously about whether you could write convincing fiction based on breakthroughs in science. I wanted to stick to the facts as much as possible, flexing things only where necessary.
As I was researching the lives of Galileo, Newton and Einstein, which form the bedrock of the three parts of the trilogy, it became obvious that the stories were so dramatic the best way to write them was indeed as novels. I took inspiration from authors such as Philippa Gregory and Robert Harris who are both brilliant at this style of historical fiction.
I figure that if the public enjoy stories about kings and queens, generals and soldiers, why not about scientists too? After all, they helped shape their times just as certainly as the rulers of the day.

Were you hoping to attract new audiences with this approach? People who might be put off by non-fiction science books?

Yes. Everything I do convinces me that many people are fascinated by science but that they perceive a barrier to understanding it. These novels show science not as a daunting edifice but as a personal endeavour, driven by individuals with belief and passion. I think that makes these stories something that most people can relate to.
I want to present Galileo, Newton and Einstein as real people, embedded in their times and cultures, and grappling with new thoughts that blossom into science and a new way to understand the universe around us. Don’t we all want to make some sort of sense of our lives in the time we’ve got?
I’ve learnt so much about what science is and what it isn’t by writing these books that I hope others will do the same.

Do you think a fictional treatment adds to our understanding?

Yes, because it invites us to empathise with these scientists as fellow human beings. As we follow them through their stories we confront the same question that they do: what does it take to stick to a belief or a course of action, even though you are being pressured by the authorities to stop and your family are suffering because of it?
The first book takes place as Europe is ripping itself to pieces in the aftermath of the Catholic-Protestant divide. Into this uncertainty, Galileo in Italy and Kepler in Germany bring new insights into Nature, new ways of understanding the Universe and mankind’s place within it. They hope for certainty in an increasingly uncertain world. The story is how they follow these personal convictions and the consequences for them and their families for doing so.
At the very core, these stories are about how do you believe? Do you need evidence or are their certain beliefs that require none? Evidence or faith? And I’m not just talking about science versus religion. All of us decide how much faith we place in individuals and beliefs, and how much evidence we need to be persuaded otherwise. The benefit of the doubt, the burden of proof – we’re obsessed with this tension of faith versus evidence. It’s one of the key balancing acts in every one of us, and there are no concrete solutions.
It’s an individual’s choice, and so exploring it in a fictional setting is the best possible way to do it.

Thank you very much! I’m looking forward to the remaining books in the trilogy.

Stuart is speaking at the Book festival on Thursday 25th August, at 3:30pm.